Save the Mingrelian Language!

Apr 20 Posted by Maka Chitanava in Governance and Social Policy 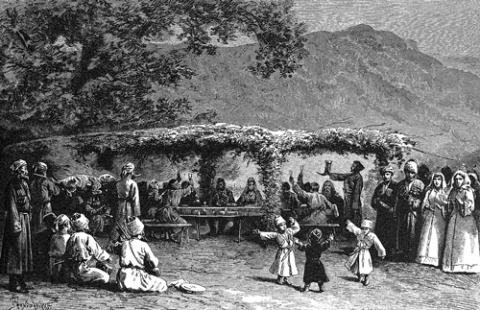 There are clear expectations in many cultures to marry somebody from their own group, and not living up to these expectations will at least cause a loss in reputation. This is nicely displayed in the movie Late Marriage by Dover Kosashvili, humorously depicting a young Georgian Jew in Israel whose parents want him to marry the “right” woman (the movie features extensive dialogues in Judeao-Georgian, another endangered language).

Why are these sanctions imposed on people who want to marry an “outsider”? There is a simple answer to that question: without the sanctions, those cultures would not have survived until today.

A hybrid academic field called Memetics, initiated by the eminent British biologist Richard Dawkins in his book The Selfish Gene, applies the rules of evolution to human ideas, religions, and cultures. Seen from a memetic angle, all those cultures that exist today have sufficient fitness in the evolutionary struggle for the minds of people, while those which disappeared were memetically inferior.

The behavior of humans is partly determined by genes (“hardware”) and partly by culture and ideas (“software”) – memes. Somebody with genetic defects will have a lower probability to procreate, and thus over time these genes will have gradually lower shares in the population. Yet also ideas have an influence on the likelihood to procreate, and ideas which reduce the reproduction rates of their followers will have less followers in the next generation (assuming ideas are transmitted from parents to children, as is often the case). There is, however, an important difference between genes and memes. Unlike the genetic endowment, which is given to each human once and for all and can only be passed to one’s children (inter-generational transmission), ideas can also spread from one person to another even if they are not relatives (intra-generational transmission).

There are four dimensions of memetic fitness, predicting how well a meme will do in spreading within the human population.

First, it is beneficial if a meme prescribes its followers to spread that meme. Examples are Islam and Christianity. In Islam, it is considered one of the greatest deeds to “make dawah”, namely to convert members of other religions to Islam. Likewise, Christians are encouraged to spread the message of Jesus, and the fact that more than 30% of the world’s population adheres to Christianity is due to the relentless missionary activities of Christians, in particular in those parts of the world that were subject to European colonization.

Second, when a culture or religion cannot proselytize, they have to adopt a different strategy – inbreeding. The smaller the group, the more strictly it has to prevent the possibility that its members marry outside the group – this is the very reason why sanctions for intercultural marriages are so harsh within small groups (up to honor killings) and less severe among bigger groups.

Third, to be memetically successful a group may encourage or require its holders to reproduce eagerly and teach the meme to the offspring. This is most successfully adopted by Islam – on average, Muslim women have a much higher fertility than Christian women. In the second half of the 21st century Islam will take over from Christianity the title of world’s most populous religion (source for both claims: Pew Report on World Religions 2015). But also the Catholic rejection of contraceptives and the Judeo-Christian call to “be fruitful and increase in number” (Genesis 1:27) requests the followers of the Christian meme to procreate restlessly.

Fourth, certain memes just yield huge intrinsic advantages to their holders and are therefore highly successful. For example, there is no need to convert people to the English language or punish those who stop speaking it. Command over the English language is so profitable that people choose to learn and speak English without preaching or pressure.

THE FUTURE OF MINGRELIAN LANGUAGE AND CULTURE

Maka Chitanava, one of the authors of this article, is a proud Mingrelian, yet while her grandmother used to speak Mingrelian, her own knowledge of the language is cursory at best, just like that of most young people in Samegrelo. This observation places Mingrelian in the UNESCO category of a definitely endangered language.

Dying languages are a worldwide phenomenon. According to UNESCO, at least 43% of the 6000 languages spoken in the world today are endangered, and it is estimated that half of the languages spoken today will have disappeared by the end of this century.

The problem for Mingrelian language and culture is that it is weak in all four fitness dimensions of a meme:

For these reasons, memetic analysis predicts that the Mingrelian language and culture will become extinct rather soon. Kenneth Hale, who taught linguistics at the Massachusetts Institute of Technology, sums up nicely why all of us, Mingrelians and others, should be concerned about this:

“When you lose a language, you lose a culture, intellectual wealth, a work of art. It's like dropping a bomb on a museum.”

Unfortunately, Mingrelian may be beyond the point where it can be saved. Among the four possibilities to gain memetic fitness, the only practically feasible one is to increase the intrinsic benefits from speaking Mingrelian. There must be some advantages from knowing Mingrelian language and culture for young people to genuinely want to study it, but creating such advantages might require nothing short of a cultural revolution. One would, of course, have to introduce Mingrelian language at preschools and schools. But, for young Mingrelians to be incentivized to study their heritage they should feel that speaking Mingrelian is really cool and that to cite a Mingrelian poem or an episode from Samegrelo’s history is a great way to impress their friends (and tourists!).

At the national level, Georgia could encourage the unique local cultures that comprise it to develop “memetic fitness” through a purposeful effort to celebrate and commercialize cultural diversity. In fact, this may be not too difficult to achieve as Mingrelia and other unique Georgian regions have considerable ethno-touristic potential. To develop it, Georgia could subsidize or otherwise encourage the preservation and branding of local cultural heritage, e.g. museums, food festivals, horse riding tournaments, dancing, singing, and poetry groups, traditional arts and crafts.

Fortunately, some movement in this direction may be already observed in Samegrelo. “The Little Prince” by Antoine de Saint-Exupéry’s has been recently translated into Mingrelian; the Mingrelian epos of “Veramkhutu” is about to be published; there are even the beginnings of a Wikipedia in Mingrelian. Mingrelian language can now be learned online. A few enthusiasts have recently started to translate short cartoons (for instance, "Zero" and "The Old Man and the Sea") to introduce the language to kids. As one of them says: “This may not be enough. Mingrelian language may disappear, and I feel like I must do something about it. This is an obsession for me”.

Whether all of this will help, however, is uncertain. The forces of memetics may be stronger in the end.