Right or Left: What Are Political Parties’ Economic Visions? 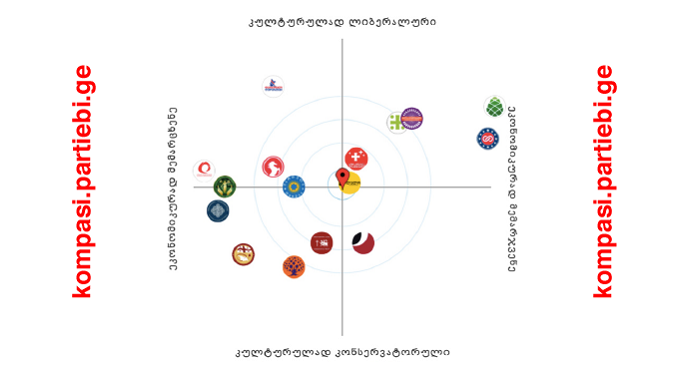 Last week Georgians took part in largely proportional parliamentary elections. Dozens of parties were registered as election contestants. To what extent do their visions coincide with yours in different important areas of public policy? You can get a detailed answer to these questions on the digital platform "Election Compass Georgia".

According to a recent public opinion poll conducted by the International Republican Institute (IRI), for 72 percent of the population, one of the two most important components of a political party's election program is their vision of economic policy. This kind of interest in parties’ economic policies substantially increases the importance of informing the Georgian electorate on this topic.

In this article, we will review the economic platforms of the Georgian political parties and discuss whether their visions are on the economic left or the right based on "Election Compass Georgia".

The Election Compass defines the parties’ attitudes towards economic development according to three thematic groups of political issues. These groups are:

2. Labor market: covers the state’s role in ensuring employment for citizens, the question of a minimum wage, and pension system issues.

3. Taxes: covers the structure of the tax system.

The academic team from "Election Compass" surveyed the selected political parties and analyzed their party platforms to identify parties' positions on various questions related to these areas of economic policy. According to the eventual analysis, five ideological categories of Georgian political parties’ economic views were identified:

• Center right-wing parties, do not support much state intervention in the economy, although, for example, they may consider it necessary to set a minimum wage or believe that the state should ensure employment for every citizen (#5 United National Movement-United Opposition “Strength is in Unity”; #24 Citizens);

• Left-wing parties that do not support the free market and, for example, believe that restrictions should be imposed on imported products (#8 Alliance of Patriots of Georgia; #26 For Justice; #19 Our Georgia-Solidarity Alliance; #46 Social Democrats for the Development of Georgia).

The table below shows which ideological group a particular party belongs to in terms of their specific ideas on the economy and their overall economic platform. 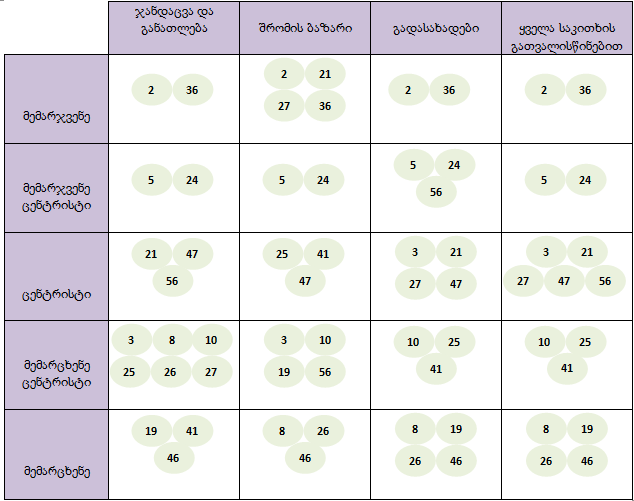 Note: Political parties are specified by the election numbers assigned to them (the relation of the parties and their election numbers is reflected in the paragraph above, the full list is also given on the CEC website).

The ideological distribution shows that we most commonly see economic centrists and most rarely economic right-wing parties on Georgia’s political map.

A detailed analysis of the data further reveals that political parties are more left leaning on economic issues like health and education policy, less left leaning on taxes, and more generally centrist on labor market regulation.

It is important to note that this distribution only shows the average ideological position of the parties on the economic issues given in the election compass. Additionally, it is interesting to see how great the ideological variation between the positions chosen by the parties on various issues is. Accordingly, Table 2 shows both the average ideological scores of the parties (-2 corresponds to a clearly left-wing approach and +2 to a sharply right-wing position) and the variation between the positions observed (presented as a standard deviation).

The recent developments reveal that Georgian political parties continue their race for parliamentarian mandates. To enhance your awareness regarding the ideological positioning of these electoral subjects visit the digital platform "Election Compass Georgia", which, among other important issues, provides detailed information about the economic visions of Georgian parties.