According to the Law of Georgia on Medical Activity[1], postgraduate medical education can take place only in accredited institutions and/or medical schools from March 2009 onwards. This seems to be a good initiative. Presumably, the goals of this law were to promote higher quality education for future doctors in the country and to deliver higher quality healthcare to the population of Georgia. These are relevant goals, of course, as the life of a human being in terms of both length and quality is and should be the most serious concern for every country...

Even so, it is difficult to judge, especially for an economist, the current quality of the healthcare system in place. The only thing that can be detected is that, given the supply of doctors and the quality of their services in our country, the average willingness to pay for healthcare is quite low. The figure 1 below illustrates this by benchmarking Georgia against other countries according to the number of doctors and per capita expenditure on health (even if heavily subsidized that can serve as a proxy for the average willingness to pay).

THE OVERSUPPLY OF PHYSICIANS IN GEORGIA'S HEALTHCARE SYSTEM 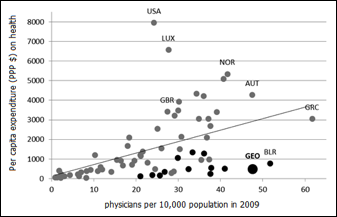 Looking at Georgia’s position against other countries, we see that it is clearly an outlier. In 2009 Georgia had low expenditure per capita on health and a physicians to population ratio unusual for this level of expenditure. Out of the countries of the world reporting in 2009, only two (Greece and Belarus) had more physicians per capita than Georgia and both of those spent more on healthcare in per capita terms. The black points on the scatter plot are former Soviet republics, which are characterized by low health expenditures and high physicians to population ratios. So, some part (maybe even a substantial part) of the stock of doctors in Georgia is a Soviet legacy. Even so, Georgia’s physicians to population ratio is still high even compared to post-Soviet republics. Only Belarus passes ahead of Georgia. At the same time, even those economically developed countries with the highest health expenditures, such as the USA and Luxembourg, have about twice as few physicians per capita compared to Georgia. Overall, our position against both former Soviet republics and other countries of the world is the first indicator of the oversupply of physicians in the healthcare system of Georgia.

Looking at prices asserts the hypothesis of oversupply once again. Low per capita expenditure and poor compensation for medical doctors in Georgia are two other indicators of this phenomenon. The average monthly salary of 523 GEL per month in the health and social work sector is just 80% of the national average[3]. Even though the latter might not be strong evidence regarding the compensation of narrower category of the sector, namely physicians; recent studies of Georgian healthcare have also found that surgeons (who in general are better paid than other physicians) are paid between 150 GEL and 300 GEL per month in the regions of Georgia[4].

THE EFFECTIVENESS OF THE "CORRECTION" MECHANISM

From an economic viewpoint, in the short run the quantity of doctors supplied is quite insensitive to wages, as future doctors need training for at least eight years. So it is really difficult (if not impossible for an 18-year-old) to take into account all the labor market requirements a decade in advance, especially since they are changing so quickly. Additionally, there are not many places elsewhere in the world where physicians trained in Georgia can work. This makes the quantity of physicians supplied even more wage inelastic.  To “correct” this kind of mismatch, the Ministry of Labor, Health and Social Affairs (MoLHSA) is responsible for setting the number of medical residency students in accordance with labor market needs.

However, this kind of “correction” mechanism is seemingly ineffective. To give an example, while Tbilisi State Medical University accepted 350-500 students a year at the undergraduate level from 2007 onwards, the quotas for medical residency programs are becoming more and more restrictive.

There are at least two caveats in this arrangement. First, the state invests in the preparation of graduates (so called, “certified medicals”) for 6 years (compared to 4 years of undergraduate study in other fields) only for most of these individuals to then not be to become doctors in their country. So, the main purpose for the state financing them in the first place is not accomplished because of the state regulation regarding medical residency student placements. One justification for this could be that selecting medical residency students from a larger pool of graduates would lead to higher quality. However, this does not really seem to be the case. The selection procedure allows older participants to compete with saved scores and does not allow for any adjustments to be made in order to take account of graduate entrance examination tests becoming gradually more complicated.

Second, no other ways of becoming a physician “beyond the state order” in Georgia (junior doctor or postgraduate education alternatives to medical residency programs) are arranged in quality-promoting ways. Once the pre-defined barrier is passed, the student who gets the information about quotas and registration dates first, transfers their fee and registers first, gets the place. All these procedures potentially foster nepotism and “medical elitism”.

As a result, none of the ways of postgraduate medical education foster quality as we would like it.

Additionally, “certified medicals” who do not receive a placement can work just as junior doctors (and, given the compensation of senior physicians, one can guess that the salaries of juniors are even lower). The other options available to these graduates ineligible for medical residency programs, are changing their profession, unemployment or further education abroad, in which case they would need to start from the beginning again and the likelihood of their returning to Georgia after that seems low. In all of the abovementioned cases public funds are simply wasted.

First of all, Georgian healthcare regulators should decide between quantity and quality. Given the current situation of oversupply, choosing quantity would arguably not be very reasonable. Conversely, upgrading quality is always relevant. Nevertheless, as resources are scarce and moreover even fixed in the short run, the quality-quantity trade-off usually implies more quality and, less quantity. So, if this is the choice we have to make, two things need to be done urgently: 1) We need to ensure that all new arrangements are quality-enhancing and 2) In order to avoid the mismatch for at least the coming generations, we need to improve the awareness of society about long-term priorities and, if necessary, even limit the number of places at the undergraduate level.