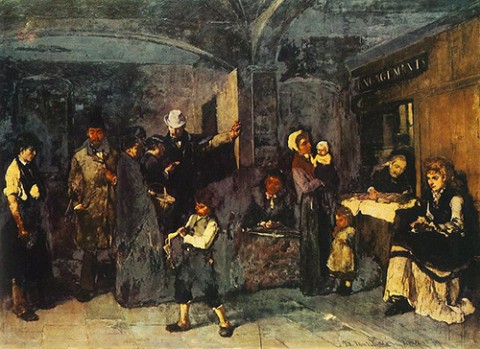 “Jewelry you can pawn whenever you encounter financial difficulties", we were told by a friend. In our circles of acquaintances there are quite a number of people who enjoy the services of pawnshops. The reasons range from renovating apartments, paying tuition for children, and buying new hi-fi systems for the car, to repaying the 1000 lari that the 18 year-old son had lost in gambling.

According to a survey of GeoStat (which accounts for all figures provided in this article), in 2013 the annual interest rate on pawnshop loans was 54,1%. For loans denominated in lari, the rate was 61,7%, and for loans denominated in dollars or euro it was 48,3%. The chart shows the average interest rates pawners have to pay in different regions of Georgia. These interest rates are surprisingly high, given that the borrower provides a security which should cover most of the default risk.

Despite the exorbitant interest rates which come in addition to collateral requirements, pawnshops are finding plenty of customers in Georgia. In 2013, 682,000 people borrowed money from Georgian pawnshops, of which approximately 99,8 percent were physical entities and the remainder were companies. This means that more than 15% of the Georgian population are pawning property in exchange for money.

Why, for hell’s sake, are Georgians bringing their family silver, grandma’s old golden necklace, the 19th century painting, or just their cellphones and cars to a pawnshop for getting credit at extortionary interest rates?

Could the reason be a lack of competition between pawnshops, allowing them to charge unreasonable interest rates? Rather not. There are 1031 pawnshops registered in Georgia (while there are only 21 commercial banks, 69 microcredit institutions, and 17 credit unions). This amount of competitors makes collusion or oligopoly pricing quite unlikely.

A collateralized loan is a two-dimensional product. Given a pawnable object, like an iPhone, the pawnshop will propose a contract that not only specifies the interest rate, but also the amount of money that can be handed out for this particular collateral. If the borrower is mainly interested in how much money they get for the iPhone and cares less about the interest rate, the competition between pawnshops will mainly take place in the credit volume dimension, i.e. the amount of money given for the pawn.

Typically, there are two types of pawners. There are desperate people in dire need of money, not thinking too much about what they will have to pay back later. This is not even irrational, as, say, a heart surgery does not allow for much delay. If having the money is a question of life or death, one can make up one’s mind later on how to pay back, if at all.

If one has an extremely high time discount rate, one wants everything now, and waiting is considered unbearably painful. As argued in a famous 1988 article by Economics Nobel Prize winner Gary Becker (“A Theory of Rational Addiction”, coauthored with Kevin M. Murphy, The Journal of Political Economy 96, pp. 675-700), an almost infinitely high time discount rate characterizes drug addicts. They are going to do everything, from prostitution to so-called “trigger offences”, in order to get the money for the next heroin shot as soon as possible, and they do not think about tomorrow, next week, or next year.

The behavior of drug addicts and financial vagabonds is very similar in this respect. The addict yearns for the drug, and the financial vagabond is fixated on consumption, and both forget about the future. Yet while the government tries to suppress the drug market, offers medical assistance to addicts etc., there is little regulation in the pawnshop business, and there is no help for financial vagabonds. While it is true that the direct consequences of drug addiction are more severe, the pawnshop mentality deteriorates the economic and financial status, which may also cause huge distress in a person’s life.

The pawnbroking business has a long tradition. In ancient China and Greece it was practised long before the Emperor Augustus licensed the first pawnshop in Rome 2000 years ago. There are interesting things to learn from Augustus’ handling of the issue.

Under Roman law it was not allowed to pawn furniture or farming equipment – being aware of the addictive character of pawnshop borrowing, the Roman authorities wanted to prevent a borrower from pawning away their economic basis. Moreover, the interest rate was capped at three per cent. The Romans understood that somebody yearning for quick money has little bargaining power regarding the interest rate, and thus they forbade abusive interest rates by law.

Total credits by Georgian pawnshops in 2013 amounted to 310.7 million GEL (43% in lari, 57% in foreign currency). As a comparison, consumer credits handed out by commercial banks totaled to about 560 million GEL. So there is no question that pawnshops are an important component of household borrowing in Georgia. And they may even have advantages compared to classical bank lending. Banks are often big players with systemic importance, and when something goes wrong, the whole system may come down. A lending business facilitated by more than 1000 small shops does not have this problem. In a crisis, there may be a price collapse of typical pawned goods, like used mobile telephones, as could be seen in 2008 when a wave of defaults shook the pawnshop sector. Yet this is nothing compared to the problems that result from a big bank running into trouble.

And because of the very fact that pawnbroking is so significant in Georgia, modern versions of the Roman regulations should be enacted.