One Step Forward on a Long Journey 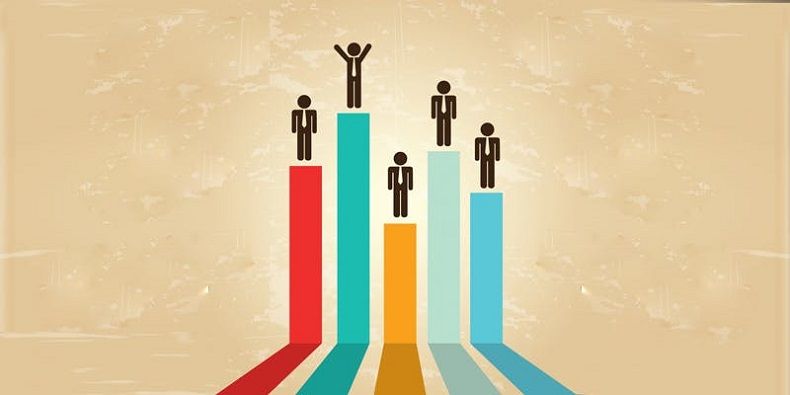 “With the Fourth Industrial Revolution (4IR), humanity has entered a new phase. The 4IR has become the lived reality for millions of people around the world, and is creating new opportunities for business, government and individuals” – Klaus Schwab, Founder and Executive Chairman, World Economic Forum.

The 4IR, as envisioned by Professor Schwab, is about breakthroughs in the fields of artificial intelligence, genetics, computing, etc. that are changing the world in which we live at breathtaking speed. With this vision in mind, the World Economic Forum is introducing the new Global Competitiveness Index 4.0 (GCI 4.0) – a modified and enhanced version that has been designed to better respond to modern competitive challenges in the global environment. GCI 4.0 emphasizes the role of human capital, innovation, resilience and agility as defining features of economic success in the 4IR.

Compared to other international indices, such as the Ease of Doing Business Index, Human Development Index, Corruption Perception Index and many others, GCI 4.0 covers all factors critical for attaining competitiveness on a global scale. Those factors are divided into 12 different pillars that span all aspects of the economic architecture of a country: institutions, infrastructure, ICT adoption, macroeconomic stability, health, skills, the product market, the labor market, the financial system, market size, business dynamism, and innovation capability. Such inclusivity makes GCI 4.0 a unique source of information – not only for outsiders, such as investors, international organizations and the donor community, but also to policy makers and the general public.

The latest GCI report, which was released on 16 October, ranks Georgia in 66th place among the 140 countries assessed. The country has advanced a mere one place compared to last year’s results. Ranked slightly higher than Azerbaijan and Armenia, but significantly below Russia and Kazakhstan, Georgia is placed 3rd in the Eurasian region. However, the preferred benchmark countries for Georgia, such as Estonia, Slovenia, and Poland, are leading the global charts and are ranked just behind the usual suspects of the United States, Singapore, Germany and other well-established developed markets.

Graph #1, below, provides a brief overview of the country’s performance over last year. Even if we do not see significant developments in the overall rankings, interesting dynamics can be observed in the performance of number of pillars. ICT adoption rose by 8.4% and a key driver of this change was the increased number of internet users. Meanwhile, business dynamism rose by 7.4%, benefitting from developments made in the Insolvency Regulatory Framework last year. On the other hand, financial system performance worsened (by -2.5%), which was mostly due to the poor performance of venture capital availability in the country. 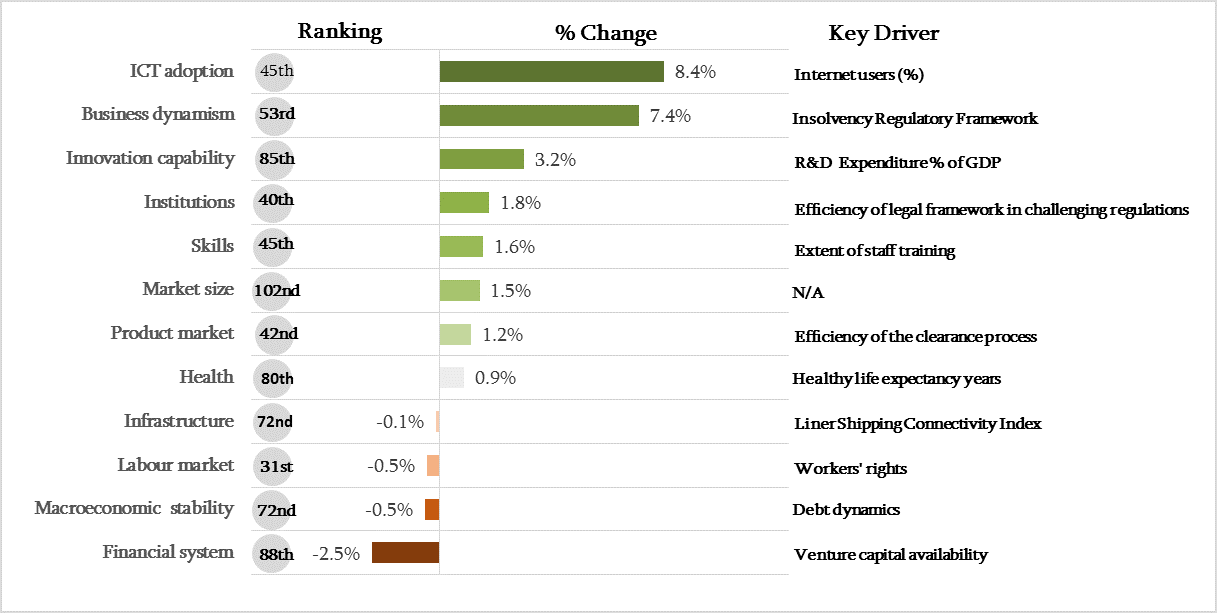 As for the absolute standings, Georgia’s scores and rankings for market size and innovation capability are the lowest among all the pillars. While being ranked so low on the market size dimension should not be that surprising given the size of the country, being ranked 85th on innovation capability should be regarded as both unexpected and alarming.

The role of innovation and research and development on economic growth are considered critical (Verspagen, 2005; Rosenberg, 2004; Cameron, 1996). Alongside its direct effect on enhancing growth, innovation has a number of positive spillovers on other economic sectors. The gaps that exist in innovation capability are thus important to explore. Even though the data provided by GCI 4.0 show that in most innovation indicators Georgia’s scores increased compared to the previous year, the overall ranking remains far from impressive. What we can extract from the data is that Georgia’s competitiveness is very low in terms of the diversity of workforce (ranked at 116th place) and the state of cluster development (ranked at 117th place). Although this does not mean that Georgia is not improving in these categories, it indicates that other countries are improving even further and faster.

Although the overall weak performance in market size and innovation capability performance is significant, Georgia’s position is relatively more competitive in the cases of its labor market (31st place) and institutions (40th place). The labor market pillar covers all important aspects of hiring and firing practices, wages, labor policies, etc. Thanks to the zero-labor tax rate (1st place), ease of hiring foreign labour (6th place), low redundancy cost (18th place) and ease of hiring and firing practices (21st place), Georgia is performing better than many other countries in this regard.

Institutional development is another important factor for the country’s competitiveness. Institutional frameworks have large and significant effects on the efficiency and growth rate of economies (Scully, 1988). Acemoglu and Robinson (2010) argue that the main determinant of differences in prosperity across countries are differences in economic institutions; therefore, one should invest significant resources in understanding the key bottlenecks and complexities facing the institutional development of a country. GCI 4.0 provides assessments for a wide range of factors (a total of 20) affecting institutional quality. The factor that provides Georgia its highest ranking (3rd place) is shareholder governance, which measures shareholders’ rights in corporate governance. Surprisingly, Kazakhstan is the global leader in that category. Other positive developments can be observed in the category burden of government regulation (with Georgia ranked at 10th place).

For the first time in its long history of country evaluations, with GCI 4.0 the World Economic Forum has introduced a new measure of institutional development – social capital. According to the rankings, this area is one of the key weaknesses of Georgia, which is currently ranked in 126th place. There are a number of different definitions of the concept of social capital, but Putnam (2000) defines it as the “connections among individuals – social networks and the norms of reciprocity and trustworthiness that arise from them”. Social capital is significant as it has a “catalizator” function, accelerating the effectiveness of other production factors. Thus, the word “capital” in “social capital” highlights the contribution of social networks as assets that produce economic returns and improve wellbeing.

The score on the social capital pillar in GCI 4.0 is retrieved from the Legatum Prosperity Index™, which, based on the data from the Gallop World Poll, measures countries’ performance in three areas: 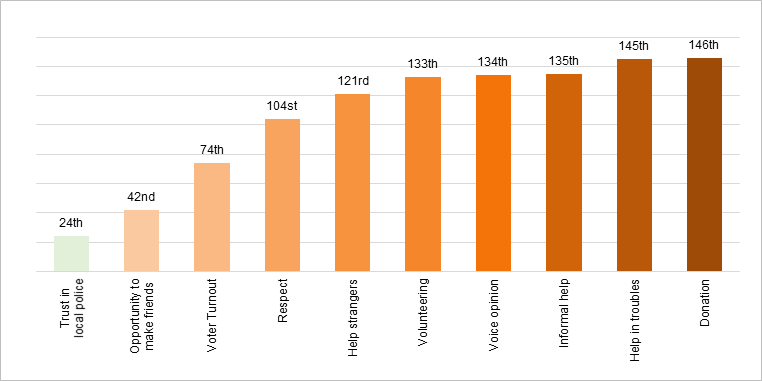 While there is noticeable variation between the different sub-categories of social capital, the first two indicators seem relevant for Georgia. When asked “Do you have confidence in the local police force?” and “Are you satisfied with opportunities to meet people and make friends?” Georgians seemed to provide positive answers more frequently than in other countries. Voters in Georgia are also more likely to turn out in elections; however, in all remaining social capital indicators, Georgia’s ranking is worryingly low (below 100th place).

Particularly worrisome are the indicators that evaluate bridging and linking social capital in the country. Out of the 149 countries included in the Prosperity Index, Georgia ranks 146th on the indicator that assesses whether people have donated money to a charity in the past month. Georgians also do not seem to help strangers in need, voice their opinions to public officials, or volunteer their time to organizations. Surprisingly, Georgians rely much less than others on relatives or friends if they are in trouble, which also shows the weakness of social bonding capital. Although this seems to contradict a study conducted by USAID (2011), which claimed that between friends and family, Georgian social bonds are incredibly strong, the rankings are very much in line with other findings of the same report that “across such groups and in more institutionalized ways, Georgian society continues to exhibit the signs of poorly developed social capital. This can be seen in every corner of Georgian society, from the failure of farmers to act collectively in buying and selling, to the crumbling stairwells in apartment blocks.”

To summarize, as Professor Schwab has argued, the Fourth Industrial Revolution is upon us. It calls for more sophisticated human capital, more advanced infrastructure, cutting-edge technologies and, above all, sound institutions – including better protected property rights, more transparent and accountable government, and more inclusive social capital. To keep up with the changing competitive global environment, we need to accelerate our speed of advancement.