Jun 23 Posted by Florian Biermann in Governance and Social Policy 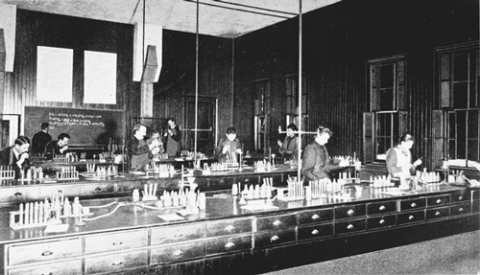 As an active chess player, many of my Georgian acquaintances happen to be old men, and among them are several former Soviet scientists: physicists, mathematicians, statisticians, and engineers. Ever since I am living in Tbilisi, they like to pull my leg regarding my scientific achievements. “With a Ph.D.”, they enjoy to say, “in the Soviet Union you would have been not more than a ‘candidate of science’”.

Talking with my chess friends, I came to the conclusion that old Soviet professors are prone to hierarchical thinking. And when I was collaborating with a Georgian mathematician, he emphasized his scientific rank by telling me about a research institute of the Red Army where he had worked. Yet instead of speaking about the scientific achievements of that institute or telling me anything about the topics that were investigated, he just said that there were “35 academics” employed at that institute. As I found out, an “academic” is the highest rank in the Soviet scientific system, to be achieved usually just in an advanced age.

Looking at extreme cases is often very useful if one wants to understand something. In this vein, let us discuss two research areas where Soviet science went completely astray, namely the Japhetic Theory in linguistics and Lysenkoism in biology, and see what role played the hierarchical structure of Soviet science in these dismal developments.

According to Marx’s theory of history, in every age there is a class of suppressors and a class of suppressed people. The first sentence of Marx’s famous “Communist Manifesto” summarizes this as follows: “The history of all hitherto existing society is the history of class struggles.” In the classical antiquity (the “slaveholder society”), the suppressed were the slaves, and the suppressors were the slaveholders. In feudalism, the oppressed were the peasants and the oppressors were the nobility. In the industrial age, the first were the workers and the latter the capitalists.

According to the so-called Japhetic Theory of the linguist Nicholas Marr, born 1865 in Kutaisi to a Scottish father and a Georgian mother, the oppressed people of all countries did originally speak the same language. The fact that they could not understand each other was due to manipulations on part of the ruling classes throughout the historical ages. The oppressors had maliciously introduced national separation as a means to prevent the unification of the suppressed class. Consequently, Marr looked for similarities in the languages of the working classes in different countries, as in the Japhetic view the linguistic differences between languages were not to be found between nations but between classes. From the 1920’s to the 1940’s, this theory, providing a justification for introducing Russian as the main language in all Soviet republics, became the leading tenet of Soviet linguistics (finally, it fell into disgrace with Stalin).

Likewise, the Soviet Union developed its own ideas about biology. Evolutionary theory of Darwin was looked at with suspicion by Marxist researchers, as a nature in which a continuous struggle for survival takes place has indisputable similarities with a capitalist economy. The analogy is quite obvious. Like in nature, in a market those companies survive which have the lowest costs and the best quality (the “fittest”). Accordingly, one can make evolutionary argument to underpin various claims made by neoclassical economics. Why would a company in a market economy produce maximally efficiently? Well, if it would not, then it would be marginalized by its competitors and finally disappear from the market (“become extinct”).

As an alternative to Darwin, the Soviet biologist Trofim Lysenko (1898-1976) developed a variant of Lamarckism, commonly known as Lysenkoism, where the animal and plant species do not develop according to principles of competition, but according to principles of cooperation. Lysenkoism became a favorite of Stalin, and many researchers who did not subscribe to this theory, among them world-renowned evolutionary biologists, went to the Gulag. After Stalin’s death, Lysenkoism was abandoned, and there is a consensus that Soviet biology never recovered from Lysenko’s nonsense and was far behind Western biology until the system finally collapsed.

There is no doubt that Soviet scientists were very smart and had a lot of expertise in their respective fields. The question therefore is how a research community made up of intelligent people could endorse ridiculous ideas such as Japhetic Theory and Lysenkoism. The answer, I believe, is to be found in the more hierarchical way in which Soviet research was organized. In Western science, absurd theories usually only convince some researchers within the scientific community, if at all, and almost never enter the mainstream. Western researchers, once they have become professors, do not have “superiors” anymore and can question and criticize whatever they want. In the West, unlike in the Soviet Union, Japhetic Theory and Lysenkoism would have been subject to open discussions and criticism. Soon, their weaknesses would have been pointed out, as in a non-hierarchical environment, flawed ideas have a much harder time to survive.

The German physicist Max Planck (1858-1947) has put it very nicely: “A scientific truth does not triumph by convincing its opponents and making them see the light, but rather because its opponents eventually die and a new generation grows up that is familiar with it.”

Indeed, one of the main obstacles for scientific progress is the existence of old, obsolete opinions held by influential persons in the scientific community. This problem cannot be solved entirely, because science is a sequential process with researchers building on the work of their predecessors. A student learning at university will inevitably be exposed to the scientific convictions of the current generation of professors.

However, the problem can be alleviated if one reduces hierarchies as much as possible. To this end, the authority of a professor to suppress deviating opinions must be limited to students studying for a degree. If a professor teaches a course on some topic, the professor and not the student will decide what counts as a right answer in the final exam. Similarly, when writing a master’s thesis or Ph.D. dissertation, there is no way but to adjust to the views of the professor finally evaluating the work. However, once a student has completed their academic education and becomes a researcher themselves, there must be no such pressure anymore.

The possibilities for independent research, not supervised and controlled by a senior researcher, were arguably more limited in the Soviet Union than in Western countries due to the extensive hierarchy. And in a totalitarian state, research not backed by higher layers of the hierarchy was difficult. Someone like the English genius Frank P. Ramsey (1903-1930), who died at the age of 26 after having made pathbreaking contributions to economics, mathematics, and philosophy, would have been hardly possible in the Soviet Union. Ramsey would not even have achieved the rank of candidate of science, and his bold investigations into a broad range of different subjects would arguably have been thwarted by senior scientists at an early stage. It is a well-known fact that many of the most ingenious mathematicians made their revolutionary contributions before reaching the age of 30, and it is questionable whether Soviet scientific structures would have provided the necessary freedom to put forward these usually highly unorthodox ideas.

For enabling researchers to pursue their own ideas, the hierarchical ladder must be short. In a Western country like Germany, one has to first get a bachelor, then a master, then a Ph.D., and then a “habilitation”, before one is a full-blown researcher eligible for a professorship. This is a long process, and very few people manage to become university professors before the age of 40. At that age, however, much of the creative power of a person may be lost already.

In the United States, the system is more streamlined. After the bachelor degree, master’s and Ph.D. studies are intertwined and there is no need for a habilitation. It cannot be said that the American system is less efficient in producing good researchers than the German system, and consequently the German system was gradually shortened. In many subjects (among them economics) a habilitation is not essential anymore for becoming a professor. This is fully logical, because a researcher who can show sufficiently many publications published in peer-reviewed journals reliably proves scientific skills. Why should a habilitation, another piece of work similar to a Ph.D. dissertation, still be necessary then?

The Soviet system, on the other hand, required a researcher to climb an excessively long hierarchy ladder, even longer than in Germany. The stage where free, independent research was possible was only achieved in an old age. Due to the excessive hierarchies, Soviet science resembled an army where the commander tells his subordinates what to research. Only if one had become a general, one could decide independently, but this happened only if one was old and creativity was gone. And in the worst times, even that was not possible, because the field marshal was Stalin, a person without any clue of science and research.

My Soviet friends may laugh at me, yet their hierarchical system they are so proud of was one of the components that made the Soviet Union fall.