Lari Winter Blues – Should We Worry? 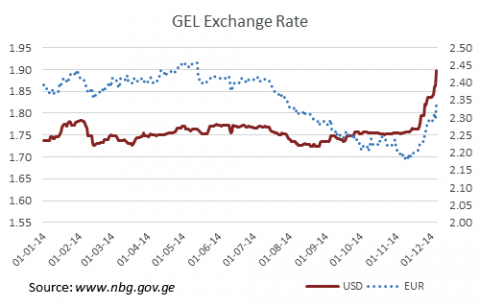 The current episode of sudden depreciation sent ripples of worry through the Georgian society and prompted opposition parties to sharply criticize the government. Leaving politics aside, the abruptness of the change in lari value and the lack of communication by Georgia’s monetary authorities (until last Friday) are certainly reason enough for public concern. In his very recent statement, NBG’s President Giorgi Kadagidze rightly pointed out that GEL’s rapid depreciation was partially caused by what he referred to as “overreaction” by the market participants. Yet, NBG’s reluctance to speak out until Friday may have been one of the factors for this very overreaction by the public, applying additional pressure on the local currency.

According to the IMF Regional Economic Outlook on Caucasus and Central Asia, Georgia has been doing relatively well, considering that the global and regional growth outlook remains in low single digits (2.9% projection for Central and Eastern Europe in 2015; 1.4% for the Euro Area; 3.8% for the World). Georgia’s main economic partners, including the European Union and the post-Soviet countries, have all experienced a significant growth slowdown since 2009. These powerful external factors will continue to affect the Georgian economy, but the country’s projected growth rate is still around 5% for 2015 – higher than the neighboring Armenia and Azerbaijan, as well as Europe’s emerging economies.

One of the main reasons Georgians worry about depreciation is the memory of the dark 1990s, when a collapse of national currency was coupled with hyperinflation and a protracted systemic crisis. Yet, the current depreciation clearly has a very different nature. And while these days the National Bank of Georgia does not intervene to fix the exchange rate, it does keep an eye on inflation. Once depreciation starts affecting prices, NBG will intervene more forcefully.

WHY SHOULD ORDINARY GEORGIANS CARE ABOUT LARI DEPRECIATION?

While not being indicative of any fundamental weaknesses in the Georgian economy, the lari’s depreciation will cause some pain for people whose incomes are in local currency but who have borrowed in foreign currency. Likewise, imported goods will probably go up in price, affecting consumption and business investment. However, none of these impacts are going to be as bad as people may fear.

Dollarized loans. Clearly, depreciation directly hits people and businesses who have taken out loans in foreign currency, but whose incomes and revenues are in lari. According to NBG data, 60% of all loans, and as much as 77% of mortgages are dollarized. Dollar loans were very attractive compared to lari loans – with on average 8-9% lower interest rates. Now people with dollar loans and lari incomes find themselves in a very uncertain situation – the effective cost of their loans keeps increasing beyond what they originally counted on.

Domestic prices. The main worry is that imported goods will be more expensive. Imports comprise about 49% of Georgia’s GDP, and the country relies on imports for a large share of its consumption and capital goods – food, textiles, inputs for manufacturers. Wine producers, doctors, dentists – all buy their materials and tools from abroad.

Of course, Georgia’s trade with the US is very small, but prices of many import items are quoted in dollars, even if we buy them from Turkey or Ukraine. It seems intuitive that a Georgian import firm, which contracted purchases of textiles from Turkey at a fixed average price of, say, $100 per item, will now have to charge 195 lari per item on the domestic market, instead of 175 lari.

SOME GOOD NEWS, FOR A CHANGE

First, the national currencies of our main trading partners – Turkey, Ukraine, Russia, and Armenia – have also been falling against the US dollar. This means that import prices may not increase by as much, or not at all. In our example, Turkish textiles manufacturers price their goods in lira on the local market. Locally produced items which cost 210 lira in July (then equivalent to about $100), will still most likely cost 210 lira, but may now be priced at about $93, given the lira’s depreciation against the dollar. Georgian firms, which don’t have fixed dollar-denominated contracts, may take advantage of this and purchase Turkish goods at a lower dollar price. As a result, the import prices for Georgians may still increase, but not at the full rate of the lari’s depreciation against the US dollar.

Second, the prices of oil and food commodities, which Georgia is importing in very large volumes, are currently at the lowest levels in a number of years. Oil prices declined from $105 to below $70 per barrel. Food prices have also been going down worldwide (a nearly 12% decline since March). These price changes may take a while to affect the Georgia market (see our analysis in ISET-PI’s recent Macroeconomic Review of the Georgian Economy), but overall, we look forward to downward pressure on domestic prices from food and oil commodities.

In light of all this, it seems that currency depreciation is by far not Georgia’s biggest worry. What we should worry about is not to slacken the pace of economic reforms and learn how to communicate with the public related to any hick-ups and short-term fluctuations in the economy.