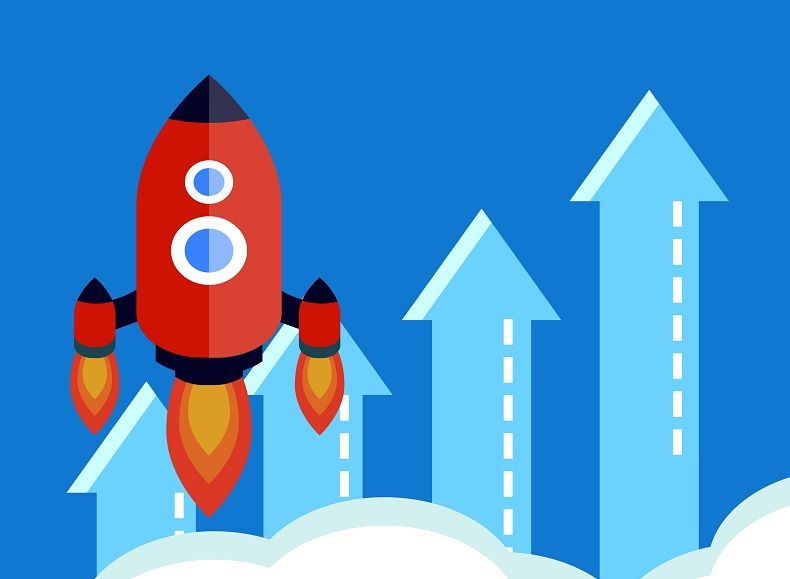 The volume of Georgian banks’ profit looks really impressive, but to evaluate how big or small it is, some benchmark indicators are needed. One of the most used indicators is Return on Equity (ROE). By definition, ROE is a measure of companies’ profitability which demonstrates how much profit a company generates for each GEL of shareholders’ equity.

But why does ROE matter? In principle, ROE measures not only profitability, but also reflects the efficiency of the company. Higher ROE indicates how efficiently the company management uses shareholders’ capital. At the same time, ROE is a key indicator to assess company attractiveness to investors.

After getting familiar with the ROE, let’s do what all Georgians and at the same time all economists love – a comparison with other countries. 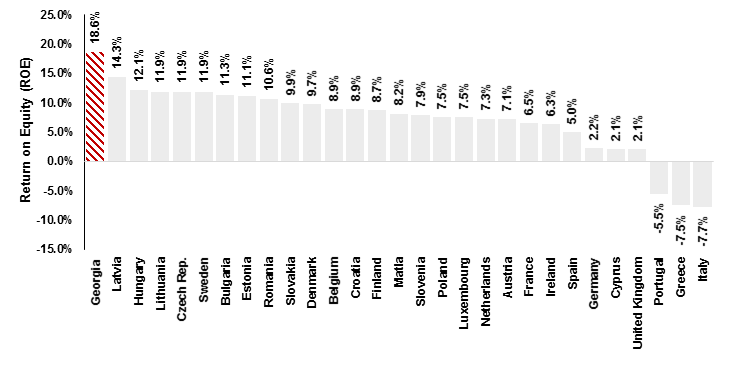 Can you notice any association with the European Union? Congratulations! Georgia takes the first position in comparison with EU countries. In 2016, ROE was the highest in Georgia (18.6%), followed by Latvia (14.3%) and Hungary (12.1%). The least profitable banks are in Portugal, Greece and Italy. In 2017, ROE in Georgia was even higher, and amounted to 24.6% on average. This is a historical maximum for the Georgian banking industry.

If we compare Georgia to our “model country,” Estonia, the difference is noticeable as well. For Estonian banks, ROE amounts to 11.1%. Because of low interest rates (business loans – 2.2%, household loans – 4.7%2), profitability becomes a key challenge faced by Estonian banks. (The profitability of the Georgian banking sector gives us the idea of sharing our success story with our Estonian friends.)

In general, high profitability of one of the economic sectors of a country seems to be positive for the whole economy, but when we are talking about the banking industry, the topic is much more sensitive and complicated, and raises many questions.

Now, let’s go back to the Georgian case. To shed some light how banks generate profit, investigation into banks income and expense structure is needed. In general, profit is just net income, calculated using the following formula:

Taking into account the fact that the banking industry mostly deals with lending and borrowing, interest income (77% of total income) and interest expenses (48% of total expenses) contribute the most in total profit generation. 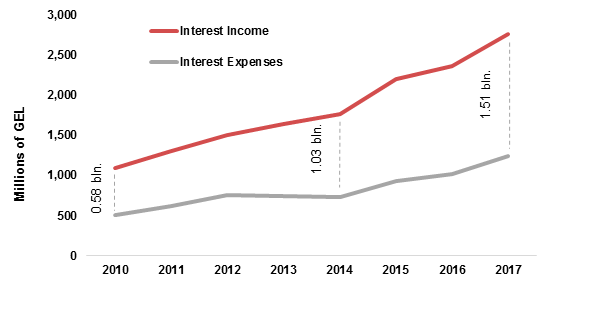 The reasons for the difference between interest income and interest expenses should be explored through interest rates themselves, particularly the gap between loans and deposit interest rates, known as the interest rate spread (IRS). The difference between these two interest rates is like “mark-up” which reflects the market structure (concentration), riskiness and efficiency of the banking sector. A high IRS is sign of an unhealthy environment in financial intermediation, which hampers access to finance and a country’s economic development. 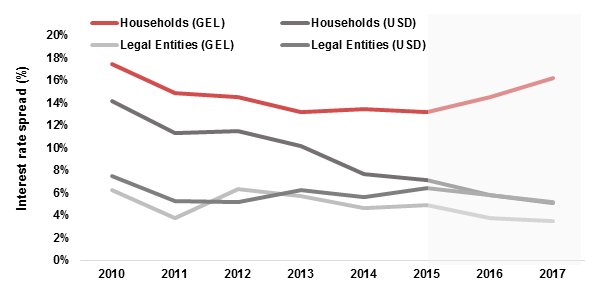 Not surprisingly, the interest rate spreads are positive (interest rate on loans > interest rate on deposits). Fortunately, they are characterized by a decreasing trend, except for the household market (in GEL) over the last two years (Graph #3). The story below provides some insights into the causes of this phenomenon:

• The demand on GEL-denominated loans increased even more, by 90% in 2017, thanks to the new policy which requires that all household loans up to 100,000 GEL must be denominated in GEL;

• Thus, in 2017, the interest rate on GEL-denominated loans increased once again;

• Higher demand on GEL-denominated loans increased demand on GEL-dominated deposits, but the interest rates on deposits increased only at the beginning of the year, and quickly stabilized. Therefore, the average interest rate on deposits, compared to the previous year, did not change much. This might be explained by a new initiative of Ministry of Finance mandating that starting in July 2017, money held by the treasury is to be saved as short-terms deposits. This helps commercial banks to maintain liquidity and have relatively cheap resources denominated in GEL.

To summarize, higher volume of loans denominated in GEL, and at the same time, higher interest rates stimulated higher profits for commercial banks. However, the impact of GEL depreciation on banks profit generation should be taken into account as well.

Graph #4. The ratio between non-interest expenses to total income

In conclusion, the banking sector’s 869 mln. GEL profit may need further detailed analysis, but we hope this article provided some insights into bank profit generation otherwise google search statistics for “Banks’ Profit” in 2018 will have to increase further.