It’s Not Who You Trade With – It’s Who You Produce With: Measuring Georgia’s Integration into Global and Regional Value Chains 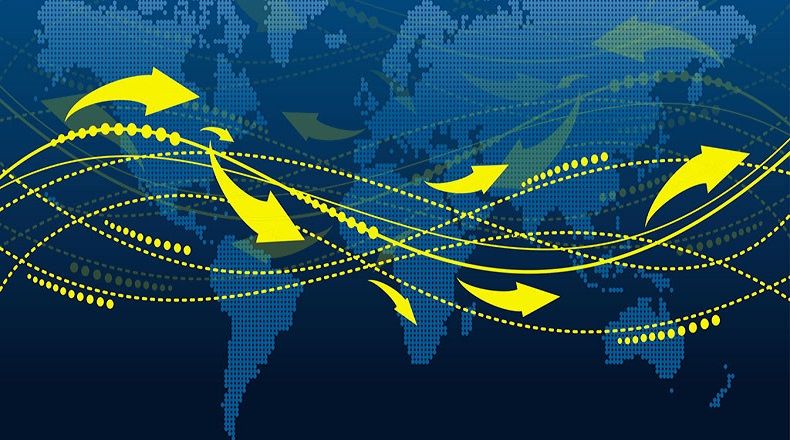 GLOBAL VALUE CHAINS AND THE CHANGING NATURE OF COMPARATIVE ADVANTAGE

We live in the world where production of a single good typically involves manufacturing inputs from many different countries around the globe. For example, a typical iPhone production takes place in as many as 7 countries, including USA, Mongolia, Japan, Korea, Taiwan, China and even Switzerland. This is what is known to economists as global value chains (GVC). The emergence of GVC more than two decades ago transformed the way economists think about countries’ comparative advantage and specialization in production. It has also transformed the understanding of what it takes for a country to be successfully integrated into world trade networks and derive maximum benefit from global trade

In the past, a country’s comparative advantage was understood in terms of specific products (e.g. according to the classical example of David Ricardo, Portugal would specialize in and export wine, while England would specialize in cloth). This old-school “wine-for-cloth” approach led many developing countries astray by shifting their focus towards import substitution and infant-industry protectionism. By protecting certain industries, countries hoped to one day develop capacity for producing and exporting certain high value-added goods (e.g. Brazil tried, and failed, to develop its nascent computer industry by protectionist measures).

The emergence of GVC and fragmentation of production meant that the share of intermediate manufactured goods imports in total world imports was more than 50%, while 70% of services imports were intermediate services. Participation in GVC became of crucial importance not only for larger emerging markets but also for smaller developing economies. Researchers find that GVC participation benefits countries in several important ways: 1) more gains from trade tend to accrue to domestic capital and labor 2) exports become more sophisticated – this is known as “product upgrading” 3) export base becomes more diversified 4) countries enjoy greater access to international markets, knowledge spillovers and technology transfers. These benefits accrue not only to large firms but to small and medium enterprises, who can exploit their speed and flexibility to carve a niche in the global market.

ARE DEVELOPING COUNTRIES READY TO REAP THE BENEFITS?

And yet, despite the obvious benefits, developing countries find it hard to integrate into global value chains. For them, the impediments to GVC participation are often linked to institutional factors: contract enforceability, strength of business environment, degree of property rights protection. These factors along with quality of the labor force and lack of infrastructure determine the degree to which these countries can participate and benefit from GVC. In order to understand these issues, the first step is to measure precisely to what extent are countries integrated into global value chains, where lie the weaknesses and what can be done about it.

Recently our research team has completed a study of global and regional value chain participation for countries in the CAREC1 region, including Georgia2.

Our main objective was to show how integrated are CAREC countries into each other’s value chain production process (i.e. regional value chain integration); how much they are plugged into global value chains, and how these patterns changed over time.

For this, we calculated a global and regional value chain participation index (RVC/GVC Index) for each of the CAREC countries, including Georgia3. The value of the Index is the sum of domestic and foreign value-added shares in a particular country’s exports. For example, an Index value of 40% would mean that 40 percent of the county’s gross exports is comprised of either goods imported from other countries, or of intermediate goods that were produced domestically and later became part of trading partner’s exports. Overall, the higher the value of the Index, the greater the intensity of involvement of a particular country in global or regional value chains.

We took index measurements at three crucial time junctures: 2006 (before the global financial crisis of 2008); 2012 (the year after the global financial crisis but before the oil price collapse and regional currency crisis in the ECA region countries); 2015 (the year of regional growth and demand slow down driven by low oil prices, political instability in parts of the region, trade wars between US and China and the move towards higher protectionism on the global scale).

Finding: Georgia and other CAREC countries are not well-integrated – with each other and with the world.

One clear finding emerging from our study is that CAREC countries are not well integrated into each other’s production processes. The countries which are most integrated into the CAREC regional value chain are Mongolia and Kyrgyzstan (18.9% and 15.2% RVC participation index respectively), followed by Pakistan and Tajikistan (8.8% and 6%) in 2015. What is also notable is that CAREC countries are not integrated enough into GVC, given their size. The average GVC participation index for CAREC countries is 40.1% in 2015. Georgia, for example, has GVC index of 40%, while OECD countries with similar relatively small populations (e.g.  Lithuania, Latvia, Estonia, Finland, Norway), all have GVC index over 50% according to 2009 data.

In the same time, it is evident that GVC and RVC participation indexes of CAREC countries are dynamic, which may reflect the changing economic landscape. For example, CAREC-RVC participation has been increasing for nearly all CAREC countries from 2006 to 2012, but then in 2015 there has been a retreat both in RVC and GVC participation. The pattern between 2006 and 2012 can be explained in part by the global financial crisis effects. The crisis likely forced many countries to look for fresh opportunities in their own neighborhood rather than rely mostly on global trade networks. In 2015, however, both RVC and GVC participation was on decline in nearly all countries. This can be explained by the global growth slowdown and regional economic and currency crisis affecting both oil-exporting and oil-importing groups of countries.

Georgia presents an interesting case study among CAREC countries, because in some ways it illustrates important tendencies in the region. For example, our study shows that Russia (Georgia’s largest neighboring economy) is also a top VC partner country for Georgia, although it is not the topmost country in terms of total volume of trade (in 2015 the top trade partner country for Georgia, based on gross trade flows was Turkey). It is also notable that Georgia’s VC linkages with Russia were not only resilient, but expanding in the face of Russia’s trade sanctions and restrictions against Georgia between 2006 and 2012.

Another interesting point is that with Turkey, another large and economically powerful neighbor, Georgia does not enjoy nearly as much integration as with EU countries like Germany and Italy. This can be explained by the fact that Turkey and Georgia are both integrated with EU countries through primary product exports (e.g. hazelnuts which are then exported to Italy for confectionaries) and their natural resources and capacities are mostly related to substitutes rather than complements in production. Interestingly, among top 10 VC partner countries there is only one CAREC member – Azerbaijan. The rest are EU countries, USA, and larger neighboring countries like Turkey, Russia and Ukraine.

A closer look at the industry level reveals that Italy is even more important than Russia as a destination country for wholesale retail value-added trade (i.e. Italy is importing more Georgia’s value-added and using it in exports than Russia in the wholesale retail trade industry), even though Russia is more important overall as a value-added destination country. Turkey and Azerbaijan also very prominent source countries for VC participation, especially what concerns wholesale products, land and water transportation services, etc.

Which Georgian industries have the highest potential to integrate into regional and global value chains?

The next step in our study was to use a diagnostic methodology to identify several industries with the highest potential for regional (CAREC) or global value chain integration. Among the industries we identified and conducted case studies for were Textiles and Apparel and the Wood and Paper industry. Below we outline key policy findings emerging from the industry case studies.

We find that Textiles and Apparel industry in Georgia is connected with the global value chains mainly through Turkey, which serves as a regional focal point for import and export of textiles. Georgia tends to import raw material (cotton, fabrics) mainly from Turkey (through Turkish-owned subsidiary companies established in Ajara region) and export the unfinished goods (apparel) for further processing to Turkey. Georgia’s value added in this process tends to be very low. Many CAREC countries import textiles and apparel from Turkey as well. Therefore, there is clearly potential for Georgia to both move up in the value-chain to higher domestic value added, and in the same time strengthen value-chain linkages with those CAREC countries that are importing and exporting textile products.

Another case study of the Wood/Furniture value chain in Georgia reveals that regional CAREC value-chain linkages can be strengthened. Georgia and Azerbaijan, both CAREC countries, are strongly emerging as regional producers of furniture, with Georgia also serving as a source of raw material (wood). The position of both countries in the global and regional value chains can be strengthened as they work to expand their market share (without compromising natural resources) and create a higher domestic value added. This would require working out strategies for complementarity and cooperation rather than competing on the low value-added segments of the chain.

While there is still much work to be done in this direction, our research is the first important step towards creating a comprehensive mapping of the GVCs and RVCs for Georgia and for other countries in the CAREC regions. It could also be of interest to policy practitioners, as it presents the tools for identifying and analyzing industries that could benefit most from immediate policy intervention.

1 CAREC region encompasses 11 countries which lie along the ancient Silk Route: China, Kyrgyzstan, Kazakhstan, Mongolia, Pakistan, Turkmenistan, Tajikistan, Azerbaijan, Afghanistan, Uzbekistan and Georgia.
2 We gratefully acknowledge the support of CAREC Institute grant in producing the aforementioned study.
3 The index was calculated based on the simplified version of the Eora multi-regional input-output (MRIO) model . The model consists of a balanced global MRIO table linking 4,914 industries across 189 countries  (included all of the CAREC countries ) estimated for 1990-2018 (results from 2016-2018 are nowcasted based on IMF World Economic Outlook).