Sep 20 Posted by Eric Livny in Governance and Social Policy

In September 2016, ISET’s Consumer Confidence Index added 13 points, the single largest monthly increase in the Index since its launch more than 4 years ago. Having risen from -28.7 to -15.7 points, the CCI rebounded to levels we have last observed about two years ago, in fall 2014 (i.e. at the outset of the GEL devaluation drama). Both the Expectations and Present Situation components of the CCI soared (up by 11.1 and 14.9 points, respectively), breaking historical records for monthly increases.

On the one hand, the latest improvement in the CCI extends a 10-month period of almost uninterrupted recovery of consumer confidence from the nadir it achieved in November 2015. On the other hand, however, our data appear to reflect an elections-induced euphoria concerning future economic reforms, as broadcasted by the ruling Georgian Dream coalition and opposition parties. Indeed, while differing in the level of detail and some operational nuances, practically all party programs envisage significant investment in infrastructure, lower taxes and more efficient government services, improvements in education, and increased social spending. Hallelujah!

The September data also betray a sense of an uncertainty on the part of many respondents. The share of “don’t know” answers in the survey was much larger in September than is usually the case.

The CCI survey was conducted through phone interviews with 368 randomly selected respondents in the first 10 days of September.

Interestingly, the CCI achieved much larger gains in Tbilisi compared to rest-of-Georgia. Most strikingly, Tbilisi residents report a 22.2-point improvement in their present situation (as opposed to a 9.4-point improvement for other Georgians).

THE ROLE OF EDUCATION

Perhaps surprisingly, better educated respondents appear to be an easier target for political propaganda (if the latter was, indeed, the main driver of the September surge in consumer confidence). Respondents with higher education reported much stronger improvement in CCI (up 13.2 points compared with an 8-point improvement for people with a lower educational attainment).

The September gains in expectations mostly reflect a lot of improvement in people’s perceptions regarding their future ability to save and make major purchases. People also report significant progress on all aspects of their current situation except major purchases. 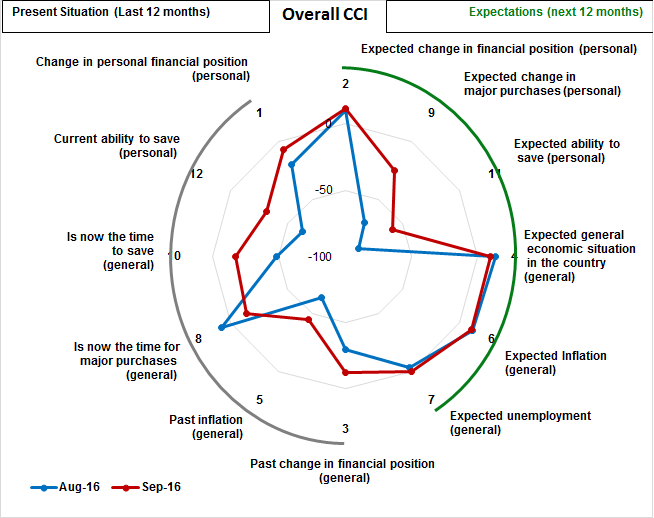