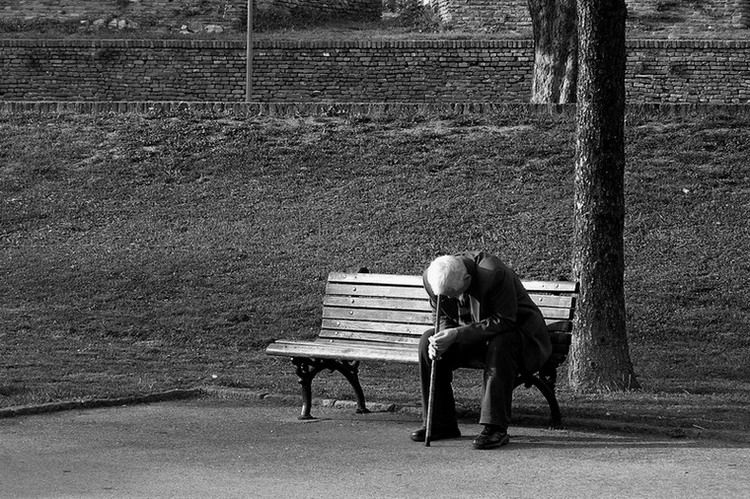 Starting from October 1, 2017, a private retirement savings system will be launched in Georgia as part of a broader pension reform. This reform has been discussed by Nino Doghonadze and Yaroslava Babych in Decent Income in Old Age: Georgian Dream or Reality? on the ISET Economist. Today we will focus only on one very interesting aspect of the reform – the “opt-out” principle and its implementation in the Georgian realities.

The proposed private retirement savings system is based on the “opt-out” principle, according to which all hired employees are automatically enrolled in the system, but have the opportunity to opt-out, should they wish to do so. In this sense, the libertarian ‘freedom of choice’ virtue is maintained – employees have the right to stay in or leave the system. At the same time, employers will not enjoy the same freedom – once a worker decides to stay in the system and pay his/her defined contribution (2% of the nominal salary), employers have no choice but match.

The “opt-out” principle can be a very powerful tool for policy makers to nudge citizens to make better choices.

• First, it uses people’s natural inertia to encourage saving. Behavioral economics suggests that people tend to stick to defaults, i.e. the pre-selected options, and are usually too “lazy” to switch to anything else. The “opt-out” principle is thus a sneaky way for the policymakers to encourage desirable choices. Madrian and Shea (2001) studied the power of default options and inertia in case of savings behavior by employees in a large U.S. corporation. They find that, controlling for all other variables, the switch from active to automatic enrollment dramatically changed the savings behavior of employees.

• Second, automatic enrollment may generate the so-called “endowment effect” (a situation when person’s valuation of a good increases once s/he comes to own it). Once a person is already in the private pension system, s/he will tend to value it more than before. Thus, thanks to automatic enrollment, individuals who may otherwise not have enrolled may be convinced to stay in the system.

If these behavior economics ideas are proven right in Georgia, the “opt-out” principle could go a long way towards solving the problem of low private savings in the country.

WILL “LIBERTARIAN PATERNALISM” SAVE GEORGIAN WOULD-BE-PENSIONERS?

The proposed “opt-out” principle is an example of the so-called libertarian paternalism – a policy which affects people’s behavior while at the same time respecting their freedom of choice. The term was coined by Richard Thaler and Cass Sunstein in their 2003 American Economic Review article. According to the authors, the “opt-out” principle is paternalistic in the sense that "it tries to influence choices in a way that will make choosers better off, as judged by themselves".

Indeed, for many young (and not so young) people, old age seems to be something that is far and away. Students or young adults do not usually think of retirement savings as their top priority because they find it difficult to imagine their old age or because they have unrealistic expectations about their sources of income in retirement. Gently nudging such forever young optimists to increase retirement savings may be in their own interest.

In this respect it is interesting to look at the results of a recent survey which ISET helped conduct.

The table provides data on how people in three different age groups view potential sources of their retirement income. Among people who are very close to retirement (50-65) nearly a half (47%) realistically assess that they will depend on relatives or on meager state pensions.

In the youngest (18-33) age cohort, however, only 12% thought that they would depend on relatives or on publically-provided retirement benefits. Young Georgians optimistically plan to live on income from real estate rental (22%). They are also optimistic about their ability to save – 17% are planning to live off bank savings as compared to 9% and 6%, respectively, among those in the 34-49 and 50-65 age brackets.

These results suggest that Georgia’s young adults have rather unrealistic expectations as to their ability to generate retirement income from alternative sources, justifying a paternalistic action by the government.

THERE IS NO SUCH THING AS A FREE LUNCH

The libertarian “opt-out” principle comes at a price. In particular, it puts the entire pension reform at risk of failing to achieve its stated objectives if the majority of Georgians do indeed opt-out.

What may force people out of the pension scheme?

• Low income. Clearly, in order to save one has to have sufficient income to at least cover the current household expenses.  If your salary is not enough to live on, the “opt-out” principle will not work. In this case the reform will cover only a small portion of employees with high incomes who may already be saving today. The Saving Behavior Assessment Survey in Georgia, conducted by ACT in 2011, showed that low income is the major obstacle for saving (70% of respondents). According to this study, an individual whose family’s monthly income exceeds 700 GEL is 2.9 times more likely to be saving than an individual whose family income falls short of 700 GEL. This study was focusing on general savings, but its findings are very relevant for analyzing retirement savings as well.

• High unemployment. With unemployment standing at 12.4%, according to the latest available data (2014), Georgian employers have much more market power than their employees. The latter may opt-out of the system in order not to compromise their position at work. This is more likely to happen in low-productivity sectors and in small and medium size enterprises, which account for 36.9% of all hired employment in Georgia. Thus, the opt-out principle may not work for a very large portion of hired employees. Using the market power to “force” employees to opt-out of pension schemes is a problem in many developed countries, where this behavior is discouraged with high fines levied on employers. Georgian government is planning to introduce such fines and sanctions, but it is not clear whether such sanctions will be effective. Employers may use subtle methods to pressure their employees: discrimination at work or unfair dismissal may be hard to link to a person’s pension scheme choices. Employees are also quite likely to self-censor their behavior in order not to create problems for employers.

• Burden of contributions. Obligatory employer contribution may be perceived as a tax levied on labor. Economic theory tells us that no matter who pays the tax, the tax burden is inevitably shared by both parties. Who will bear more of the burden and who will bear less of it will depend on labor supply and demand elasticities. Following this logic, we can expect that low skilled workers will bear a higher share of the burden by taking pay cuts and or being forced to opt-out of the pension scheme.

• Trust towards the national currency. According to the ATC study, stability of the national currency was another important consideration in the savings behavior for 69% of respondents. Last year’s devaluation of the Georgian lari definitely caused many depositors to shift their money to dollar-denominated accounts. As pension savings will be held in GEL, a lack of trust in the national currency may prove a serious obstacle for the proposed pension reform scheme.

Finally, the degree of trust in the management of the new pension system will also be a key factor. A question in the ACT study about institutions preferred as potential deposit insurers can be used as a proxy for the level of trust people have in the government, at least when it comes to pensions. In the survey, 24% of respondents preferred to have a large Georgian bank as the deposit insurer, 21% preferred insurance offered by a foreign bank, 20% - by the Georgian government, and 12% by the National Bank of Georgia.

Based on this evidence we can say that as many as one fifth of the Georgian people still tend to trust the government with their savings, but it is not at all clear that this level of trust be sufficient to overcome all other obstacles and help people stay in the pension system. This is a question that the policy makers still need to answer.

Of those Georgians who save, only 6% are saving for retirement. 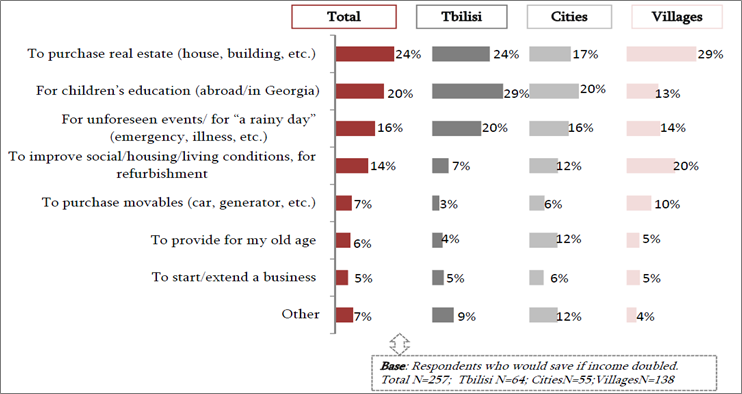