Jun 30 Posted by Robizon Khubulashvili in Governance and Social Policy 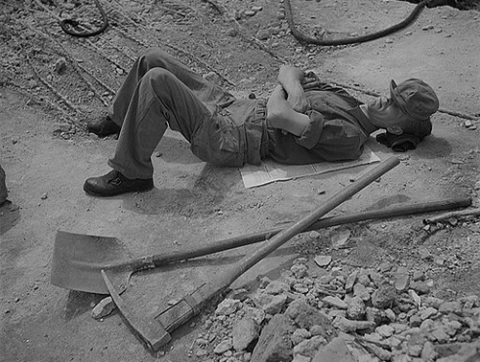 In Georgia, employment is often found not through prevailing in fair, orderly selection processes, but through personal connections. This is a well-known fact almost nobody denies. It is evident in almost every Georgian firm and institution. In a hospital you encounter a “nurse” not capable of the most basic medical accomplishments, in one of Tbilisi’s universities you meet a “cleaning woman” who is mentally ill, known for scaring everybody through aggressive and inappropriate behavior, and in the railway station you buy a ticket from a clerk who knows nothing about regulations, timetables, and trains. In one of the “vajkatsi” sketches, you can see what a vajkatsi does to find a job: hanging out in the park, waiting for friends to provide work opportunities.

In the Georgian language, people who are not employed because of their suitability for a job but due to other reasons are euphemistically called “coffee makers”. Two months ago I visited several companies in Shida Qartli and found out that there are plenty of coffee makers even in private organizations. “I cannot fire her because she is my business partner’s mother in law, but in reality she does nothing”, I was told by a desperate owner of a hotel, going on to complain that he would need only half of his employees for a proper functioning of the hotel.

Also in the public sector, the problem is ubiquitous. Once a person has achieved the political level, the media exercise some control, preventing the worst excesses. At deputy minister level and higher, one will face criticism if buddies and relatives are employed. Yet on lower levels, media are much less attentive.

When two months ago Irakli Gharibashvili met students at Tbilisi State University, economist Irakli Mirtskhulava asked the Prime Minister how he could accomplish his goals to develop the country with nonqualified staff. Mirtskhulava stressed that that government institutions were full of insufficiently qualified “coffee makers”, doing practically nothing but receiving salaries. The Prime Minister did not disagree and answered that he is “looking high and low” for qualified and skillful personnel. The answer is just partly satisfactory, as it is less a problem of availability of qualified people. Rather, it is about flawed selection processes that allow those who select applicants to overrule objective criteria and shove jobs to their buddies or, even more problematic, to simply create new jobs for them.

BUT GEORGIA HAS A SLIM GOVERNMENT…

But how does this story fit to Georgia’s undisputed achievements in streamlining the government?

It is very difficult to find numbers showing the extent of this problem. Nobody admits to be a coffee maker, and nobody speaks about having provided a job for a buddy. For the public sector, one may take the share of public employees as a (very) rough measure of how much “air” is in the system.

The graph shows the composition of the Georgian population according to employment. 5% of Georgians are employed in the public sector, about 12% of the Georgian labor force. This does not seem excessively high, and may at first sight even be taken as evidence for the efficiency of the public sector. Yet 12% is higher than in many developed countries which, according to OECD data, are way below 10%, like Germany, Poland, Chile, Japan, and Korea. Moreover, there is a famous observation already made in the 19th century, called Wagner’s Law, saying that the share of the public sector in the economy grows with economic development. The main reason is that many functions that are taken over by the government in developed countries are neglected by the governments of developing countries. For example, in developing countries governments often do not feel responsible for correcting inequality and providing poverty relief, so that there is typically no social welfare state. 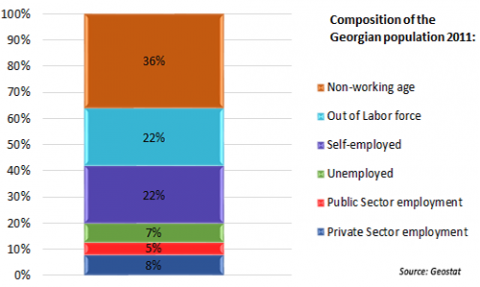 If one assumes that the number of public employees is positively related to the budget administered by the government, then Wagner’s Law would suggest that the public employment in a developing country will be lower in relative terms than public employment in developed countries. This argument, however, only holds under the assumption that the size of government employment reflects the amount of functions taken over by the government. If government employment is misused for other purposes, for example for providing jobs for buddies, political patronage, and for beautifying the unemployment statistics, then economic development and the size of the government sector may diverge. So, in low-income countries a large public sector is more likely to indicate a problem than in a developed country. In Azerbaijan, public employment arguably accounts for more than 55% of the labor force (ILO data from the end of the 1990’s, newer data not available), which does not mean that Azerbaijan is a particularly developed country. Rather, the Azerbaijani public sector is ballooned and much bigger than what would be justified by the state of economic development.

So, while 12% do not trigger off the alarm bells, one cannot use this data to reassure the critics that there is no problem with nepotism in the public sector.

WHAT TO DO ABOUT IT?

Georgia is the undisputed world champion in killing off corruption, at least when it comes to the highly visible petty corruption, widespread before 2003. This includes measures like making the admission exams for universities an example for the world how to organize exams in a fair, clean, and objective way. Yet if a country can organize its admissions exams in a perfect way, it can also rid its personnel management from nepotism. Organizing an admission process and an application process is not very different in the end. Is there a lack of political determination, perhaps because public employment is a convenient way to cater political clienteles?

It is more difficult to address the problem in the private sector. Here it has to do with mentality. As long as entrepreneurs and managers consider family ties and friendships more important than the success of their firms, the problem will persist.

Perhaps, one can raise public awareness through open discussion. While there is nepotism everywhere when it comes to entrepreneurs and owners of companies, in North-Western Europe and the USA it would be considered a severe abuse of office if an employed manager would hire family members. If detected, such a manager would have to face dire consequences. Having a public debate on the issue might help to raise standards in Georgia as well.