Georgian Haves and Have-Nots. Who’s to Blame and What to Do?

Just like the World Bank’s Doing Business, Transparency International’s Corruption Perceptions Index and many other international rankings, the European Bank for Reconstruction and Development’s (EBRD) Transition Reports have typically carried a very positive message for Georgia, Eastern Europe’s poster child of transition since the Rose Revolution of 2003. This year’s Transition Report, launched last week in Tbilisi by Alexander Plekhanov, EBRD’s Deputy Director of Research, is somewhat exceptional in this regard. Subtitled “Equal opportunities in an unequal world”, the 2016 report draws attention to the inconvenient truth that Georgia has performed exceptionally poorly when it comes to inclusion and social mobility. In fact, when compared to all other transition nations, Georgia finds itself on the extreme right (both literally, on the chart, and figuratively) by failing to equalize the opportunities for its (largely urban) haves and (rural) have-nots. 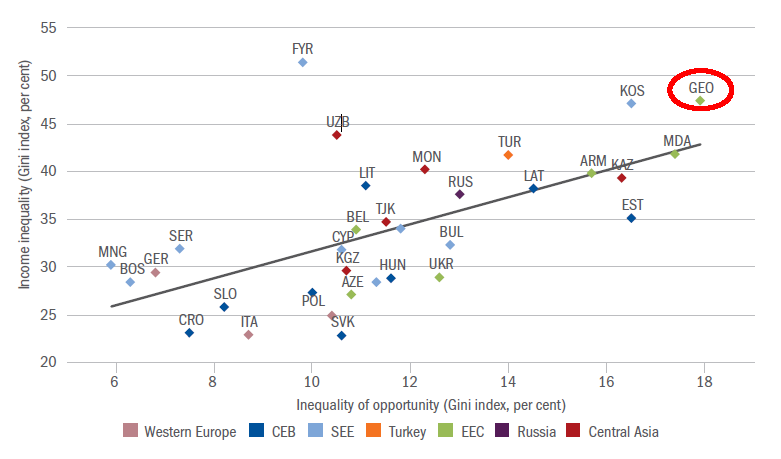 Based on a survey of 51,000 respondents in 34 countries (with Germany, Italy, and Czech Republic serving as comparators), the chart shows how income inequality (on the vertical axis) correlates with inequality of opportunity (on the horizontal axis). As can be seen, the two variables are strongly and positively correlated: income inequality in a country is very much a function of the extent to which its education system, and labor and financial markets, allow for upward social mobility. According to EBRD calculations, 20% to 50% of income inequality in the EBRD region is due to circumstances at birth: urban/rural place of birth, parents’ level of education and membership in the Communist Party (i.e. belonging to the old elite), gender, and ethnicity.

On average, this may not seem like a major disaster – inequality of opportunity is an even more serious issue in the US and most emerging economies. Georgia’s specific problem, however, is that it is well above the regional average. According to the EBRD data, the future social and economic status of Georgians is almost predetermined by their circumstances at birth: the inequality of opportunities limits social mobility and perpetuates the society’s rigid divisions into those who are integrated into the modern economy, and those who survive in traditional subsistence farming and other forms of self-employment and underemployment. What are the reasons for this frustrating situation, and how can it be changed?

ARE GEORGIANS PROUD, LAZY OR WHAT?

A key paradox of Georgia’s economic development since the Rose Revolution has been the almost complete lack of expansion in the country’s hired labor force. Despite growing demand, the share of hired labor remains constant at about 13% of the population, of which 5% are employed in the public sector – teachers, army, police, local and national administration (GeoStat). 13% is a staggeringly low share. For comparison, of Germany’s population of 80 million, about 53% are employed.

It is crucially important to understand that formal employment remains stagnant not due to a lack of jobs. If anything, jobs are not created for lack of suitable labor. Georgia has seen a lot of investment in the modern sector of the economy: banking, tourism, trade, transport, manufacturing, modern industrial agriculture, and food processing. On the one hand, employers are hungry for people with specific professional qualifications, e.g., IT technicians, production line workers, tractor operators, sales, and kitchen and hotel management personnel. On the other hand, they are also looking for staff culturally adjusted for employment in the service industry, able to communicate in their own and foreign languages, able to read and follow instructions, operate computers and exhibit basic discipline, attention to detail and timeliness in the performance of various tasks.

Georgian employer surveys show that, for most companies, availability of qualified labor is THE binding constraint for business expansion (it is consistently ranked as the #1 or #2 factor hindering business development, e.g., in the latest Global Competitiveness Report). And as demand for hired labor outstrips supply, wages in the modern sector of the economy have been growing by between 5% and 12% per year since 2011 (GeoStat), increasing the income gap between those have jobs and those who do not.

If Georgia’s economy is to remain competitive, something must be done to facilitate and encourage the transition out of low productivity agriculture and other traditional activities (e.g., housekeeping) into modern sectors of the economy. The remedy for lack of social mobility is not only vocational training, as many pundits keep saying at every opportunity, but also investment in early learning systems targeting the rural population.

Given the incredibly low starting point, there are a lot of gains to be made. Improvement in early learning must start with an effort to bring new blood and new ideas into the system, including technology, young teachers, and young role models (Georgian and international). Examples of such new role models are American Peace Corps volunteers, and teachers enlisted in the innovative Teach for Georgia program.

While highly successful, these two recruitment models are limited in scope. For example, there are currently only 111 Peace Corps volunteers serving in Georgian schools and NGOs. To provide a mass of underprivileged kids growing in Georgia’s periphery with something resembling equal opportunity, we would have to scale up existing programs or come up with new ideas, based on existing best practices from around the world. There is no need to reinvent the wheel. One easy possibility would be to institute civil service as an alternative to military service. Additionally, Georgia could create a mechanism to engage its best and brightest, who study with governing funding, to give back to remote communities in Georgia’s small towns and villages.

The deep rift between Georgia’s traditional and modern economies is not only a key bottleneck for its economic development. It is also a threat for its fledgling democracy. Not all inequality in wealth and income is equally disturbing. If people had more or less the same chances to realize their potential, inequality would only reflect differences in performance (and a bit of luck), and would not be much of a social and political problem. On the other hand, “inequality at the starting gate,” i.e. a radical lack of equal opportunity at young age, threatens the legitimacy of any economic and political system.

Bridging this rift and creating the conditions for spatial and social mobility is the only way to break out of the vicious circle reproducing functional illiteracy, poverty and inequality, in which a very substantial part of Georgia’s population finds itself since independence. There is no time to waste.