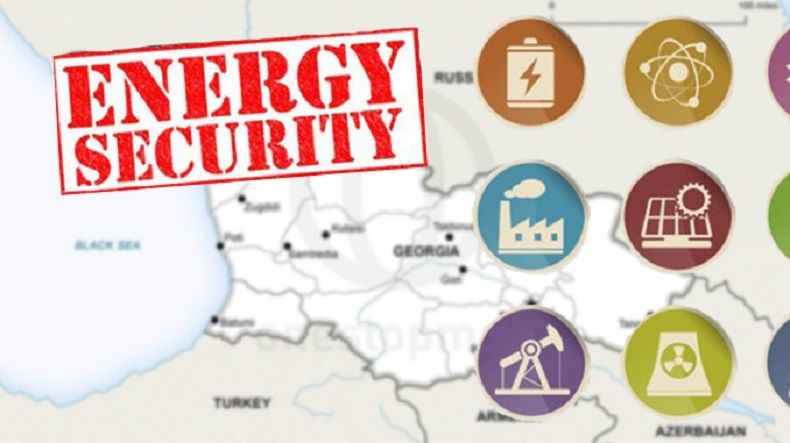 Azerbaijan and Russia remained the main providers. Until 2017 when Azerbaijan took the leading position, Russia was the major electricity supplier for Georgia. During the years 2017 and 2018, 61% and 82% of imported electricity came from Azerbaijan, while Russia provided 30% and 14% (Figure 1).

Examining Figure 2, it is obvious that the trend has continued in 2019 as well, since – most of the time – Azerbaijan provided the largest share of Georgian imports. However, just like in 2018, in September 2019 imports from Russia outpaced those from Azerbaijan. In this month, 67% of imported electricity was provided by Russia, with the remaining 33% supplied by Azerbaijan. It appears that, despite the decline in the market share of electricity imported from Russia (minus 30 percentage points compared to September 2018), the Georgian power market still depends on Russia during the month of September. 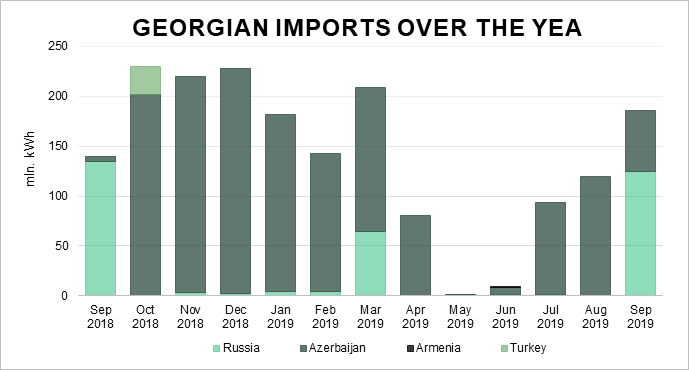 Investigating the official website of Russia’s electricity system operator, we found that electricity generation and consumption have increased by 2% and 3% respectively in the month of September compared to the same month the previous year. Moreover, the positive generation-consumption gap has decreased by 17%. This implies that the amount of available resources for Russian exports has been declining since last year, causing a tightening of the Russian power market.

From a broader perspective, increasing demand from Turkey and declining spare capacity in Russia — if these trends continue — might lead to a tightening of the regional power market, potentially causing an increase in electricity import prices and lower availability of electricity.

Even now, though not necessarily for this reason, import prices are on the rise. As can be seen in Figure 3, in September 2019 import prices for Georgia increased by 70% compared to the previous September, and by 24% compared to August 2019 (from 15.18 to 18.76 tetri/kWh). 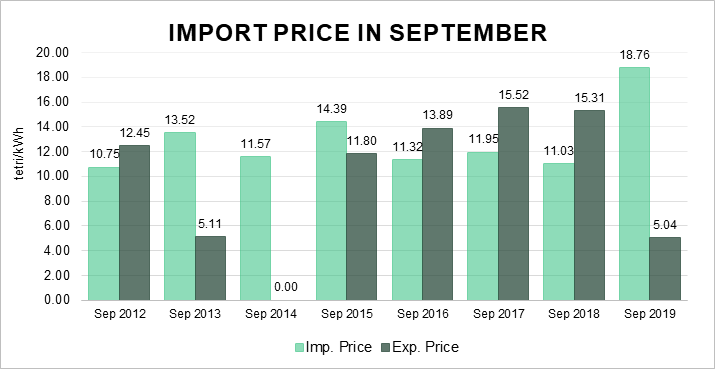 Since import prices could be affected by the currency utilized for settlement (USD), it is important to look at currency fluctuations.2 Compared to September 2018, the Georgian Lari has depreciated against the US Dollar by 14%3. At the same time, the Russian Ruble has appreciated by 4% against the US Dollar over the same period, according to the Central Bank of the Russian Federation.4 Currency volatility is, therefore, one of the factors which could potentially have contributed to the increased import price. However, even taking into account the price increase in US Dollar terms, a substantial share of the spike in import prices (about two thirds) remains unexplained. This evidence supports the idea that factors other than exchange rate fluctuations (such as the tightening of the regional power market) might have contributed to the increased import price.

As internal generation struggles to keep up with increasing demand, the emergence of a tighter regional power market could constitute a threat to energy security for Georgia in the near future, both in terms of availability of electricity and its affordability. The evidence presented calls for proactive measures to increase the country’s energy security. These measures may include supporting investments in diversified power generation sources, pursuing opportunities to create energy storage, and popularizing the adoption of energy efficient technologies, together with attempts to increase the number of potential providers of electricity inside and outside the region.

1 According to the Georgian National Tourism Administration International Visitor Trips decreased by almost 28% in September compared to August 2019. Moreover, average temperature decreased by 19% in September 2019 compared to August 2019, based on National Environmental Agency Data.
2 Since Azerbaijan has stabilized exchange rate arrangements with a margin of 2%, their currency hardly fluctuates.
3 Monthly exchange rates were compared based on NBG data.
4 The monthly exchange rate was calculated as the average of the daily rate based on data from the Central Bank of the Russian Federation.