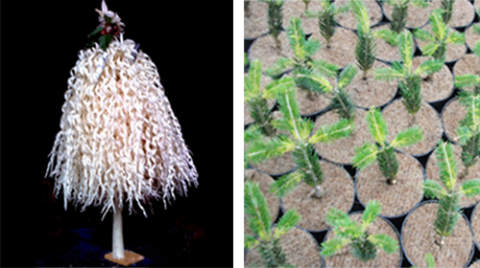 Exporting the seeds of the Nordmann fir – a very popular species grown for Christmas trees – is a thriving and fiercely competitive Georgian industry, perhaps the only one in which Georgia has a near monopoly of the European market. According to an industry expert, more than 80% of all Christmas trees sold in Europe have their origin in Racha (Tlugi and Ambrolauri) and Borjomi forests.

In 2013 Georgia exported more than 60 tons of fir tree seeds, with a total value of almost $US 2 million ($32/kg on average). Denmark is the largest buyer of Georgia’s Nordmann fir seeds, and, in turn, the largest producer of Christmas trees for Europe (ironically, some of the Nordmann firs grown in Denmark find their way back to the Georgian market).

Competition in the Georgian market is remarkably robust. About 10 companies co-exist in the market since 1993, having survived onslaughts by the Georgian mafia (we-collect-you-sell 50:50 deal in 1990s; and we-handle-the-labor-union-which-we-organized 50-50 deal in 2013), government efforts to extract licensing fees, and an attempt by one player to monopolize the entire market by allying with a major Georgian bank and smearing other competitors as non-ethical and environmentally irresponsible.

Europe’s demand for Georgian Christmas trees can be partially explained by the natural beauty of the Nordmann fir and its superior qualities – needles that are not sharp and do not drop once the tree dries out. But there is another important factor not to be overlooked.

Despite some national variation, Europe has a fairly robust legal framework and effective enforcement systems to prevent illegal logging. Having been strengthened in 1990s, these regulations created a business opportunity for Christmas tree nurseries in countries like Denmark. Denmark started producing Christmas trees shortly after the end of World War II, but it was not until the 1990s that this industry took off. By 1999, Denmark was Europe’s leading exporter of natural Christmas trees, paving the way for Georgia’s triumphant entry, as early as in 1993, into the European fir seed market.

Nordmann fir nurseries are a relative novelty in Georgia, an “infant industry” by definition. Their modest beginnings probably go back to December 2010 (exactly four years ago), when on the eve of Christmas the Georgian Ministry of Environment and Natural Resources announced tough enforcement measures, including increased fines (from the then 50-400 to 1000 GEL) for illegal logging.

Yet, to date, nursery-grown Christmas trees are a seldom find in Georgia. One problem facing anybody entering the fir tree nursery business in Georgia (or anywhere, for that matter) is time: it takes 5-10 years to bring fir trees to a size demanded by the market. Thus, despite low initial investment, nurseries require patience. The second problem is more specific to Georgia: small market size and traditional bias. Georgians are not as keen on buying fir trees from nurseries.  Likely consumers are the relatively well-educated and well-off middle class urban households, yet this target group is (still) very small.

In addition to illegally cut Christmas trees (particularly in Georgia’s countryside), the Georgian market is saturated with perfectly legal cheaper substitutes. These include artificial trees, mainly imported from China, and traditional Chichilaki produced from hazelnut or walnut branches that are shaved to form a small tree-like Christmas decoration. Yet another alternative is “trees” constructed by attaching fir branches onto holes in a broomstick or similar “trunk”. All these further shrink the local demand for nursery-grown Xmas trees.

Finally, one may ask: why would not Georgian nurseries produce Nordmann firs for exports to the much more lucrative European market? Georgia’s forests are the natural habitat for Nordmann firs, and given that its land and labor resources are considerably cheaper than those of Denmark (one of the most expensive countries in Europe and the world), Georgia-grown Christmas trees should be quite competitive in the European market.

The answer is straightforward: such exports are rendered prohibitively expensive by EU’s phytosanitary restrictions on the importation of plants. Europe welcomes seeds, but not plants.

AND GOING BACK TO GEORGIA’S ROOTS

Each year around Christmas, the Georgian Ministry of Environment and Natural Resources orchestrates a public “do-not-cut-fir-trees” campaign using promises of tougher enforcement and emotional appeals by high profile individuals, such as renowned actor Kakhi Kavsadze, to convince the public of the benefits of law-abiding behavior.

While this annual ritual seeks to enlighten and educate the public, the persistence of illegal logging is nothing cultural. Perhaps surprisingly for some, Georgia has time-honored traditions of protecting forests and other commonly managed resources, such as pastures. As discussed by Maka Chitanava, Georgian communities learned to save forests by assigning “property rights” to local gods, and that long before any government regulations have been conceived by environmentalists. Similarly, “Councils of Elders” in places like Tusheti have traditionally provided effective protection against overgrazing. And, let’s face it: the Georgian Chichilaki is much more eco-friendly than live Christmas trees (a German invention!).

Georgia’s problem is not the lack of environmentally sound traditions but the almost complete collapse of these traditions, as well as all formal government institutions, in the dark 1990s. A new social equilibrium emerged in which people have lost their faith in each other, their community and government, resulting in anti-social behavior. Illegal logging was but the rural expression of social implosion, paralleled by the dark and filthy Tbilisi condominiums, as well as ugly construction in the city’s parks and playgrounds.

Sadly, reconstituting Georgia’s social fabric and bringing back socially and environmentally sound practices is very difficult in the face of rural and urban poverty. Christmas trees are but a tip of the iceberg. Wood is still the primary source of heating energy in Georgia’s countryside. According to a USAID-sponsored Household Energy End-Use Survey, 41% of Georgian Households’ total energy consumption is still provided by firewood. The share of firewood in total heating energy consumption is much higher in rural areas (above 80%), and that despite progress with gasification. Villagers simply prefer to consume cheap (or free, if obtained illegally) firewood. This kind of behavior is not only anti-social. It is also myopic. The result of irresponsible forestry management is landslides and eco-migration, not eco-tourism. A vicious circle.

Like any systemic problem, unsustainable forestry management requires a multi-pronged policy response. Tougher enforcement and awareness raising should be important elements of any such response, particularly in the longer run. But something must also be done – and urgently – to improve the lot of rural poor by helping them re-establish traditional local self-governance and cooperation at the village level as a means of furthering economic productivity (e.g. in food production) and managing the environment.

Adopted in 1998, EU’s Forestry Strategy seeks to ensure sustainable production of wood and other forest products and protects forests “for their role as public amenities, biodiversity reservoirs, regulators of climate and local weather, sources of clean water, protection against natural disasters and renewable energy sources.” As a result, Europe’s economic development goes hand in hand with a continuous expansion of forest areas – currently covering more than 42% of EU land area, according to the EU Commission.

Well, Rome was not built in one day, but better start a day early.