Earth Is not Cool, It Is Getting Hotter!!!

Jan 24 Posted by Ia Katsia in Agricultural and Rural Policy 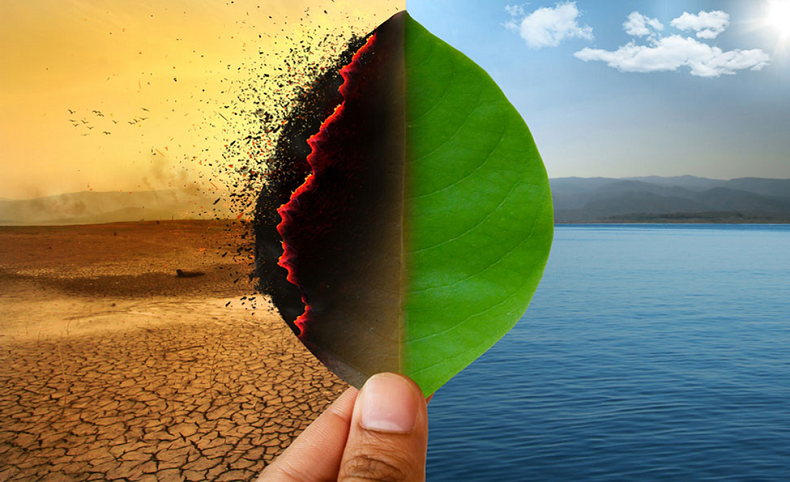 Did you know that:

• the 20 warmest years on record have been in the past 22 years?

• in the past 20 years, 4.2 billion people have been affected by weather-related disasters, including a significant loss of lives?

These and other broader changes such as rising sea levels, accelerating ice melt, shifting seasons, etc.  occurring on earth are associated with climate change.  Starting from the mid-20th century, there has been a rapid increase in the average temperature of the earth’s climate system that alters many aspects of our everyday lives, including food consumption (in terms of both quality and quantity), health, and lifestyle.

Three main economic sectors contributing to climate change are: energy (61%), transport (20.1%), and agriculture (8.5%). Interestingly, 25% of human-induced greenhouse gas (GHG) emissions are caused by agriculture, forestry, and the change of land-use. Within agriculture, the major contributor is the livestock sector, accounting for 44% of human-induced methane (CH4), 53% of nitrous oxide (N2O) and 5% of carbon dioxide (CO2) emissions.

In general, the major adverse effects of climate change associated with agriculture are:

• dramatic decrease in quantity and distribution of seafood, including fish;

• increase in the prevalence of pests and vector-borne diseases;

• increased frequency of extreme weather events such as storms, floods, and droughts.

Climate change will have an impact on all four dimensions of food security: food availability, food accessibility, food utilization, and food system stability. Forecasted increases in temperature might cause changes in weather patterns and reduction of water availability that may lead to reduced agricultural productivity.

Agricultural production in low-income developing countries that are already suffering from a high level of food insecurity is expected to be adversely affected by climate change. According to Ban Ki-moon, the former United Nations Secretary-General, “the people at greater risk from climate hazards are the poor, the vulnerable and the marginalized who, in many cases, have been excluded from socioeconomic progress”.

The numbers show it all: due to climate change, low-income countries have experienced the greatest losses, the monetary value of which is estimated at 5% of GDP.

Similar to other low-income countries, Georgia might experience great loss due to climate change. With more than half of its population involved in agricultural activities, Georgia is very vulnerable to threats associated with weather and climate conditions. The country has already been experiencing some impact from climate change, including diseases and pests, hail storms, droughts, and landslides annually. According to the National Climate Vulnerability Assessment of Georgia, the monetary losses as a result of natural disasters (landslides, floods, drought, storms, avalanches, hail) from 1995-2013 were 2,708.25 million GEL.

According to World Bank estimates, the major trends expected in Georgia regarding climate change are as follows:

o The southern and eastern regions are expected to be hardest hit by high temperatures and prolonged heat waves.

o Urban areas are expected to be at risk of increased heat due to heat island effects in urban areas and limited infrastructure capable of handling demand for active cooling.

Major concerns have been raised regarding food security in Georgia as Georgian farmers play an important role in providing a safe, secure and affordable food supply to country’s population. During 2016-2018, the prevalence of severe food insecurity as a percentage of the total population was on average 7.6% in the country. According to the World Food Programme, if Georgia does not take adaptive measures, vulnerability to food insecurity will increase by 11% from the present day on the condition that the country maintains its low levels of GHG emission.

Figure 1. Prevalence of severe food insecurity in the total population

The Government of Georgia (GoG) recognizes climate change as a threat to the country’s sustainable development in the Rural Development Strategy of Georgia 2017-2020 as climate change is likely to have a negative impact on agriculture and its productivity, therefore, it can exacerbate the living condition of rural poor. The fundamental constraints in Georgia’s agriculture such as of capital, land fragmentation, and rural poverty have led to low productivity and inefficiency in production. As a result, Georgia contributes to high GHG emissions per unit of end product.

In 2012, Georgia’s Low Emissions Development Strategy (LEDS) was prepared under the US Agency for International Development (USAID) to ensure a low emissions transition and sustainable path for Georgia’s economic development and support climate change mitigation through action in different sectors, including agriculture. In this regard, the main objective of LEDS is to support increases in productivity and improve efficiency in Georgian agriculture, while reducing GHG emissions per unit of end product.

In 2015, Georgia prepared and adopted the Intended Nationally Determined Contributions (INDC) according to which the country plans to reduce its GHG emissions by 15% below the “Business as Usual Scenario” (BAU) for the year 2030. This implies reduction in emission intensity per unit of Gross Domestic Product (GDP) by approximately 34% from 2013 to 2030.

Agriculture might serve as a remedy for climate change as the agricultural practices adopted can contribute to climate change mitigation through reducing GHG emissions and increasing resilience to extreme weather events. In the upcoming years, several measures are planned for the adaptation of agricultural sector to the climate change in Georgia:

o Research and development of emergency response plans for agriculture dealing with the extreme weather events including droughts, floods, etc.

o Establishment of information centers for farmers that provides guidance on adaptive management of agriculture.

Georgia needs to develop and endorse the Climate-Smart Agriculture (CSA) strategy at regional and national levels, as well as a subsequent action plan, setting up a monitoring and evaluation system with a defined baseline and targeted indicators. Climate change issues will be further discussed in upcoming blogs.