Borrow in Dollar or Lari? That Is the Question! 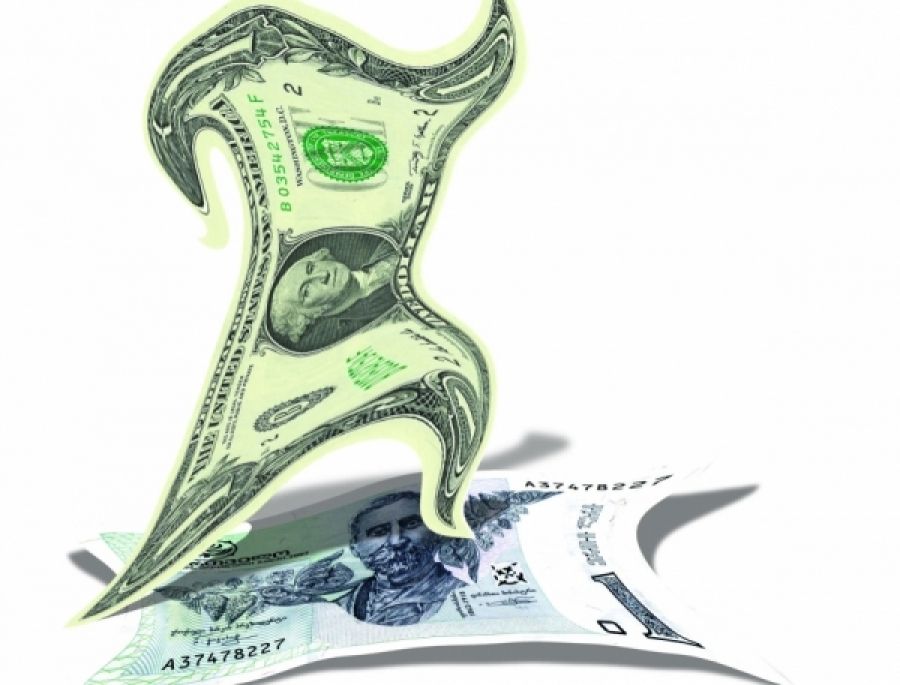 The Georgian lari’s depreciation against the dollar has been a pressing issue for everyone: economists and policymakers, students, housewives and even the good-for-nothing “birzhavik’s”.

The weaker lari may be good news for Georgia’s export competitiveness and trade balance, yet it also pushes up the prices of anything we import. This may include some luxury items we can do without, but also many things that are absolutely essential for the Georgian economy: primary commodities, production inputs and machinery, foodstuffs and medicines. And by raising the prices of these indispensable imports, the weakening of the lari affects Georgia’s production costs and general consumer inflation. For example, the main reason for the recent 30% hike in electricity tariffs was the increase in the price of imported gas used for thermal electricity generation.

So far, Georgia has been able to keep inflation at bay through a combination of factors including prudent policies by the National Bank of Georgia and a near halving in the dollar price of many basic globally-traded commodities, such as oil and wheat. Yet, one of the most debilitating and alarming impacts of the lari’s deprecation has been on households and businesses who hold loans in foreign currency. The share of such loans exceeds 60% in total loans, posing grave macroeconomic and financial stability risks for the Georgian economy as a whole.

DEPRECIATION AND THE COST OF SERVICING DOLLARIZED LOANS

The weakening of the lari translates into higher monthly payments on loans which are fixed in dollars, increasing the cost of servicing such loans. Importantly, not all types of loans are equally dollarized. While a huge share (80%) of mortgages is dollarized, only about 20% of consumer loans are denominated in dollars. Yet, given that mortgages constitute about 50% of total loans in Georgia, continued depreciation may have serious socio-economic repercussions.

While it may be intuitive that the lari’s depreciation would negatively affect those who borrowed in dollars, the actual costs to borrowers depend on a variety of factors such as a loan’s maturity and the interest rate differential between the dollar- and lari-denominated loans.

In this post, we will try to answer the following questions:

For Georgian consumers and businesses, how much did the cost of servicing dollar and lari loans change over time, and especially since lari depreciation? Why do people continue to take loans in dollars? And, finally, is it better to take out a lari or a dollar loan nowadays?

THE “CHEAPER BORROWING” ILLUSION AND THE RUDE AWAKENING FOLLOWING DEPRECIATION 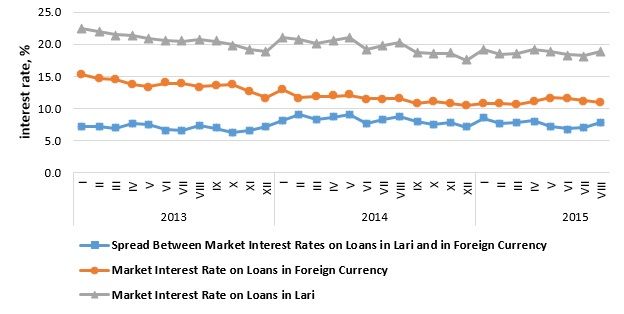 In the mind of an economist, this spread is actually reflecting the lower levels of risk associated with dollar loans. By the arbitrage theory, individuals should be indifferent between taking loans in lari or in foreign currency - otherwise loans would be either 100% or 0% dollarized. Until March 2014 the arbitrage theory worked well in the Georgian case - the difference between the costs of servicing lari and dollar loans was relatively small (see Figure 2).

Figure 2: Difference between Costs of Servicing Lari and Dollar Loans (in 1000 lari) 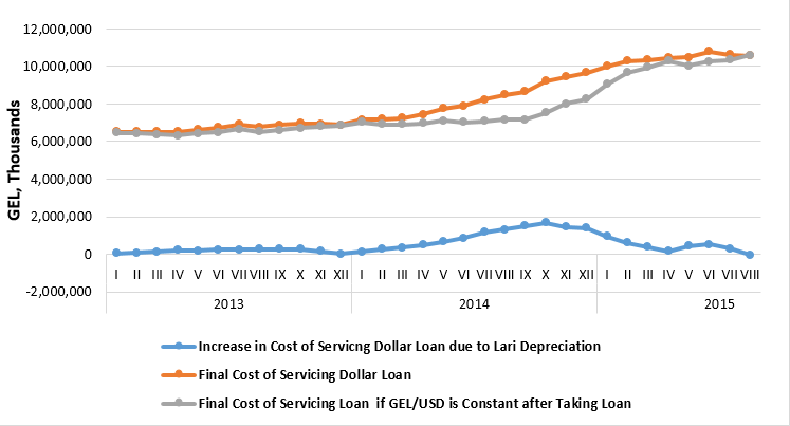 The graph above shows the total payment (principle plus interest) that Georgian private borrowers would have to pay after one year on their foreign currency loans taken out in each given month (the amounts of foreign currency loans are expressed in GEL) and compares this to the hypothetical sum that Georgian borrowers would end up paying if an equivalent amount was borrowed in lari in the same month.

For example, in January 2013 the principal amount of all outstanding foreign currency loans in Georgia was worth about 5.9 billion GEL. The average bank interest rate on a foreign currency loan was around 15.3%. In a year’s time (in January 2014) the borrowers would have to pay around 6.5 billion in GEL terms (more than 15.3%, because the lari depreciated against USD during that time). This amount (6.5 billion GEL) is represented by the first triangular point on the graph for January 2013.

If the equivalent amount was borrowed in GEL, and the borrowers would have paid the average bank interest rate of 22.5%, they would end up paying about 6.7 billion GEL (a bit more, but relatively close to the amount they would have paid on a dollar denominated loan, after the currency conversion)

Between 2014 and 2015 the burden of servicing debt for Georgian private borrowers increased quite significantly.

For example, the total amount of interest payments in January-September of this year was 735 million lari, while in the whole of 2014 it was only 692 million lari.

For example, we can see that that the ratio of the total interest payments on loans taken by households to total wages (compensation of employees in the national income accounts) was 8.6% in 2013, 8.8% in 2014, and then jumped to 12.6% and 12.2% in the first 2 quarters of 2015! Clearly such jump could not be explained by an increase in consumer credit.

WHY DO PEOPLE STILL BORROW IN DOLLARS?

In light of lari depreciation, the costs of dollarized borrowing appear to be very high for the Georgian economy. If we make calculations based on market interest rates and exchange rate between January 2013 to August 2015, we would see that Georgian individuals and legal entitles could have saved 1.036 billion lari overall - if they took out lari instead of dollar loans during this time (in this calculation I assumed that from October 2015 GEL/USD = 2.39. We need this assumption for calculating cost of servicing dollar loans starting from December 2014).

So, why do people still borrow in dollars? Looking at Figure 2, we can see that the relatively high cost of 1-year dollar loans is most prominent in the period between May 2014 and February 2015. This means that for people who have taken out loans in March 2015 the cost of servicing a lari or a dollar loan should be roughly the same.

BETTING ON WHAT THE FUTURE HOLDS

So, what are future borrowers to do at this point? Should they take out loans in lari or in dollars? Of course, it depends on the interest rates and the future (expected) exchange rate. Although we cannot know for sure what the future exchange rate will be, we can try to make some predictions based on the information currently available.

One can identify two main drivers for the lari depreciation. First, dollar appreciation is a global phenomena, which was in part caused by USA “playing” with its oil production – i.e. the technological advances in shale oil production which dramatically increased US output of oil.

Second, the foreign currency inflows to Georgia have been on the decline in recent months because of: 1) economic challenges facing our trading partners; 2) decrease in remittances to Georgia (especially from Russia and Greece); 3) decrease in Export volumes; and 4) decrease in FDI in the first quarter of 2015.

Let’s assume that the oil price will not change in the next 2 years. Thus, one may expect that the other sources of lari depreciation will gradually return to their natural levels and the flows of foreign currency will recover. If this happens, lari will be set to appreciate again.

Let’s assume that lari/dollar exchange rate will be close to GEL/USD=2.0 value by the end of 2017. In this case, lari will appreciate on average by about 0.7% every month against the dollar. We will also assume that  market interest rates on both lari and dollar loans will not change in any significant way until the end of 2017, and that the growth of dollar loans in the Georgian economy will maintain the same pace as in the past few years.

If this is the case, then taking dollarized loans will decrease the total cost of loan servicing by 12% (about 3 billion lari in two years). By taking these loans, borrowers will pay 17% less than if they borrowed in lari (the savings will be about 4 billion lari in two years). So if you are willing to bet on lari appreciation, you should take out loans in dollars, and enjoy paying back the debt with fewer and fewer lari each month! And don’t forget to keep your savings deposits in lari as well.