Apr 08 Posted by Florian Biermann in Governance and Social Policy 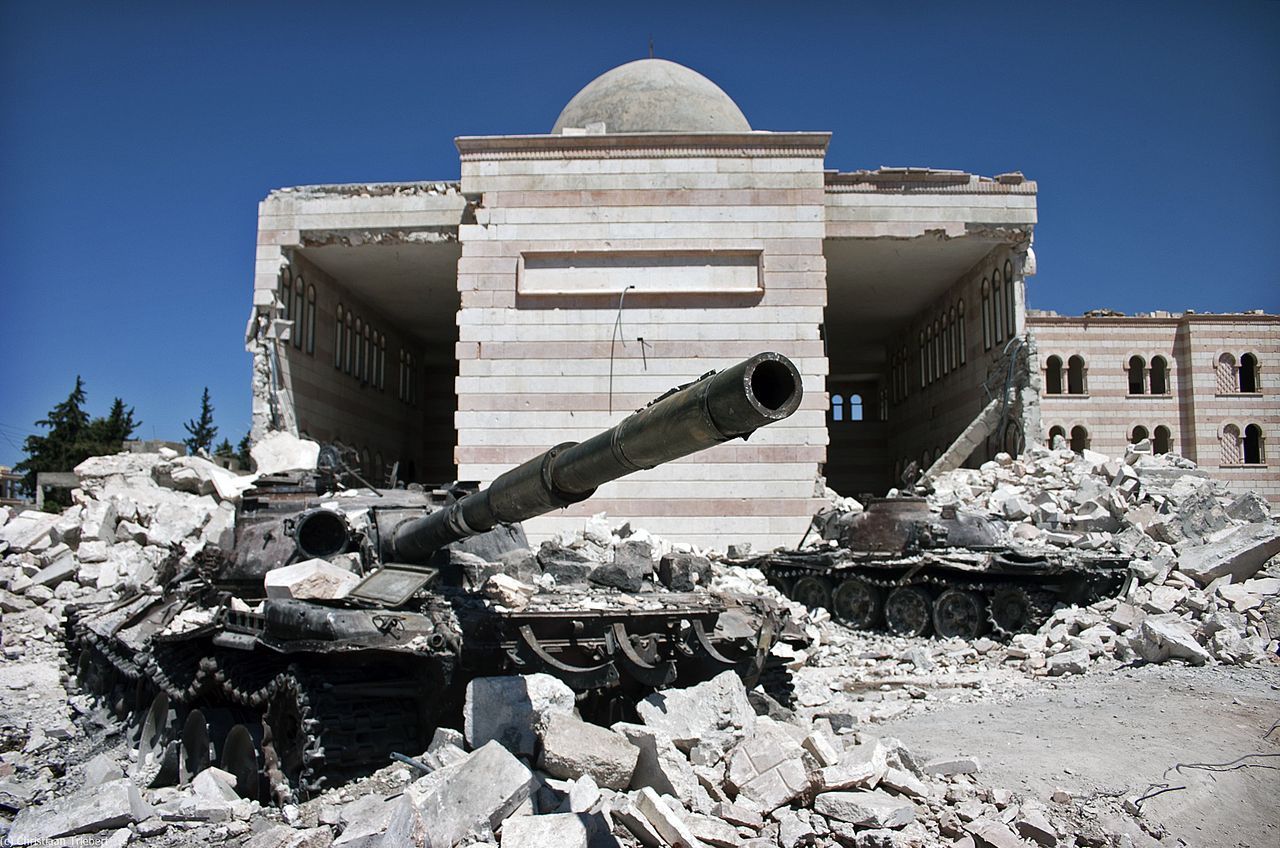 In 2007, an American businessman and friend of the then Prime Minister of Israel, Ehud Olmert, was visiting Damascus before continuing his journey to Jerusalem. On the morning of his departure to Israel, the Mukhabarat, Syria’s secret service, knocked at his hotel room. The Syrian agents calmed down the scared businessman – he was not to be taken to some torture prison, of which there were many in Syria. Instead, they wanted to know what was Ehud Olmert’s favorite dish. Surprised about this question, the businessman answered “hummus”, and half an hour later a big tub of the finest hummus of Syria’s most distinguished restaurant arrived to the hotel room: “For Ehud”. The businessman took the hummus to Jerusalem, and on the afternoon of the same day, Olmert sat down with his head of security and ate it without testing whether it was poisoned. The meal was filmed and the video sent back to Assad.

PUZZLE 1: WHY IS ISRAEL AGAINST ASSAD?

The incident shows that, unlike many other politicians of the region, Assad is not ideologically against Israel. Rather, Assad is the ideal type of a lazy Arabic despot whose only concern is to stay in power and have a good life. Like most of his peers (many of whom were toppled in the “Arab Spring”), he is highly corrupt, entirely unscrupulous, and easily manipulable. Moreover, as the event described above demonstrates, he is potentially interested in finding an agreement with Israel, and he is a ruler with whom Western powers, if they are not too principled, can strike deals. It has therefore always been puzzling for me why Israeli politicians, particularly right-wingers, regularly engage in the most aggressive rhetorics against Assad’s regime.

There are two potential explanations, but both are unsatisfactory. The first possible reason is Assad’s alliance with Iran and the Lebanese Hezbollah. However, Assad is not in a position to choose his friends. Had the West been friendlier towards his regime, it is not unlikely that he would prefer allies who were less militant and less religious. Assad, who studied ophthalmology in London, is not intrinsically hostile towards the West: not only did he send hummus to Olmert, but he also cooperated very closely with the Western security apparatus whenever he was invited to do so. Until 2003, Syria was a partner of the CIA in the “extraordinary rendition” program, which allowed the interrogation of terrorism suspects in countries where the bill of rights was not in place. As Robert Baer wrote in the New Statesman: “If you want them to be tortured, you send them to Syria. If you want someone to disappear – never to see them again – you send them to Egypt". The cooperation, not only with the Americans, went smoothly. Even Germany interrogated a terrorism suspect directly in a Syrian prison. It shows that Assad, if given the opportunity, would like to partner with the West.

The second potential reason for Israel’s hostility might be a concern that a friendlier dialogue with Syria would bring the return of the Golan Heights back on the table. While it is true that Syria would press for a return, Israel would not have to give in. Israel also conquered the West Bank from Jordan, never returned it, and today enjoys amicable relations with that country.

At the same time, given its influence on Hezbollah, Syria has a lot to offer to Israel. A deal where economic and security cooperation was provided by Israel in exchange for peace at the Israeli-Lebanese border seems to be profitable for both parties.

PUZZLE 2: WHY ARE THE UNITED STATES AGAINST ASSAD?

As I mentioned already, Assad is the classical example of a corrupt Arabic despot, and throughout most of the 20th century, the USA were on excellent terms with rulers of that kind. Assad uses chemical weapons against civilians, which is despicable and inexcusable, but the United States were not always as concerned about chemical weapons as they are today. Throughout Iraq’s war against Iran, the USA provided Saddam Hussein (another typical Arabic despot) with essential satellite information and military intelligence, enabling the Iraqis to target their adversaries with chemical weapons.

Moreover, while the United States and other Western countries frequently pay lip services to human rights, moral considerations were never enough to openly work for a regime change as in the case of Assad. According to Amnesty International, about 5,000 people have been executed in Iran since 1979 because they were gay. The ongoing practice of murdering gays did not lead to calls for a regime change in Iran – to the contrary, with the nuclear deal of 2015, the West prolonged the life of the Iranian regime, which, as many experts say, was on the verge of collapse. Likewise, Saudi Arabia represents an ideology that is indistinguishable to the one of the Islamic State, and the country spreads this extremist version of Islam globally. Yet, there were no calls for regime change so far.

The US obsession with toppling Assad becomes even more puzzling if one considers that Assad, before the civil war started, was not the most wicked of all Arabian autocrats. As an Alawite, he belongs to a Muslim minority which is frequently persecuted by the Sunnites, and Alawi Islam represents the most tolerant and modern interpretation of that religion. Moreover, Assad protects not only the Alawites but also other minorities in his country, notably the Christians, who are violently persecuted almost everywhere else in the Islamic Middle East. If the 75%-Sunni majority of Syria would take over the country, the Christians, Alawites, Kurds etc. might suffer like other minorities in countries where Sunnites have the majority. According to a 2015 poll conducted by the British pollster ORB, 47% of Syrians say that Assad has a “positive influence” on their country, while the respective values for the Free Syrian Army and the Syrian Opposition Coalition are only 35% and 26% (multiple answers were possible). While there are many questions about the reliability of such numbers, it provides some evidence that Assad enjoys considerable backing in the Syrian population.

I am not against upholding high moral standards in foreign policy, but then they should be applied to everybody equally.

PUZZLE 3: WHO CAN REPLACE ASSAD?

In the last ten years, the experiences made in the “Arab Spring” were highly disenchanting. The Arab revolutions did not lead to prosperous democracies but replaced the existing authoritarian regimes by even more authoritarian regimes, mostly being less stable and more religious than their predecessors. Why would Syria be different? In a population where 35% and 21%, respectively, say that the Al-Nusra-Front and the Islamic State have “positive influence”, democracy may have a tough position.

Obama’s declared goal was to topple Assad, and since last week, also Trump seems to pursue that goal. Yet, if one aims at regime change, one should have a plan for the time that follows. For me, it is hard to imagine what that plan could be.

WHAT HAS TO BE DONE?

It seems to me that there is only one solution for Syria: the West must join forces with Russia and help Bashar al-Assad to regain control over his country. If one would help Assad to consolidate his government, one could ask for something in return, like a general amnesty for his secular opponents, a peace agreement with Israel (including Assad’s proxy Hezbollah), maybe some kind of democratic representation for the population of Syria and other reforms which restrict his absolute power.

It is clearly objectionable and painful to support a ruthless dictator who uses poison gas against his own population. If there is nobody who could realistically take his place, however, this is the only way to go. I have no idea what the USA and other Western powers are up to in Syria, and I am perplexed by the three puzzles laid out in this article, but what I know is that the Syrian civil war causes unbearable suffering among the Syrian population and fuels the refugee crisis in Europe. It has to stop as soon as possible.