On the 8th of March, Georgia joined many other countries around the world in celebrating the International Women’s Day. While this particular way of appreciating the many contributions of the Georgian women may be said to have been inherited from the Soviet Union, women have historically played very important roles in Georgian society and politics. The most prominent among them were Medea of Colchis, St. Nino, who brought orthodox Christianity to our country, and “King” Tamar, who ruled the state in its “Golden Age“. It was during this “Golden Age“, as early as in the 12th century, that Shota Rustaveli wrote, “Lion cubs are equal, be they male or female”.

Despite these early feminist tendencies, partriarchal traditions remain deeply rooted in Georgia’s society. In particular, Georgians remain convinced that it is up to the men to provide for their families. For instance, according to 2010 Caucasus Barometer data, 83% of Georgians believe that men should be the major breadwinners in the family. That said, only 36% considered this to be really the case. Moreover, 39% believed that the main breadwinning function is actually performed by Georgian women, not men.

Regardless of local traditions and norms, gender equality has been internationally recognized as an important milestone in a country’s development. It is regarded as a basic human right, and is also one of UN Millennium Development Goals (MDGs) for 2015. But does gender equality promote economic growth? If so, in what way?

GENDER EQUALITY AND GROWTH: WHY ARE GOOD TIMES SUPPOSED TO BE GOOD FOR WOMEN?

Gender equality, as defined by the UN, is about “equal rights, responsibilities and opportunities of women and men, girls and boys”. The concept encompasses many difficult-to-measure aspects of social life – customs, traditions, attitudes and believes. Here I will focus on a particular measure of gender equality commonly used in economics – female Labor Force Participation (LFP).

There is a vast economic literature analyzing the relationship between gender equality in terms of LFP and welfare. Even though there is no agreement as to what causes what (women’s LFP increases welfare, or greater welfare increases women’s LFP), there is consensus among the researchers that “good times are good for women” (Dollar & Gatti, 1999). In other words, economic prosperity and welfare go hand in hand with female LFP.

A rather simple (if not simplistic) theoretical explanation for the empirical observation that relative wages of women rise as countries industrialize was offered by Galor and Weil (1996). According to them, the process of industrialization increases the ratio of capital per worker, which raises the relative wages for females. This happens because machines can substitute for brute male force while at the same time creating job opportunities for gentle and patient female operators. In other words, the process of industrialization tends to offer greater rewards for skills in which women have a comparative advantage – such as fine motor skills in textiles (US and UK in the 19th century) or electronics (present day Asia). As the opportunity cost of not working in the modern industrial sector goes up, women increase labor force participation. As a consequence, fertility rates decline and capital per worker ratio increases even more, further stimulating economic growth and female LFP. In this way, the theory claims, female LFP and economic development reinforce each other.

So far so good, however, the empirical relationship between LFP and economic development is not always positive. Rather, at low levels of economic development, female LFP tends to decrease as GDP per capita goes up. As observed by Goldin (1990 and 1994), female LFP starts increasing only beyond a certain threshold of GDP per capita, resulting in a puzzling U-shaped relationship. 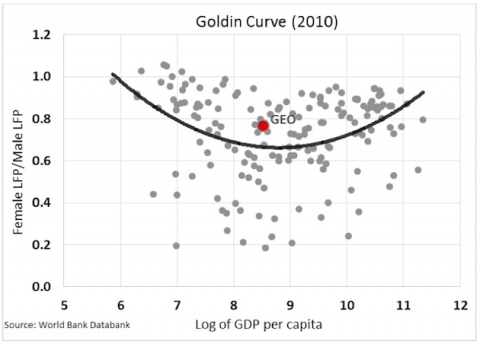 Several explanations emerged in response. One explanation is related to fertility and infant mortality dynamics at low levels of income. High infant mortality in low-income countries creates the incentives for families to have more children than the actual “desired” number (whatever it is), as a sort of old age insurance. As income levels and welfare rise, however, the quality of healthcare services tends to improve fairly fast, leaving families with more children than they have anticipated. Thus, up to a certain threshold level of income, economic development and related declines in child mortality leave mothers with less and less time available for participating in the labor force.

Yet another, complementary explanation is that at low levels of income, economic development is mainly achieved through the expansion of traditional industries, such as agriculture, arts and crafts, which are not “rival” to child rearing. Thus, while being informally involved in the traditional sector, women remain outside the formal labor force statistics in low income countries.

With per capita income of 5,036 international $ in 2010, Georgia finds itself near the threshold income level (6,667 international $) of the Goldin curve. While not an outlier, Georgia has higher “gender equality“ than the Goldin curve predicts, implying that Georgian female LFP relative to male is higher than the average for countries with similar level of income per capita.

And the process of gender equalization and female empowerment is clearly gaining momentum! While the ratio of female to male LFP stayed roughly the same over the last decade (75%), the wage gap between Georgian men and women has been slowly but steadily closing since 2005. In 2011, the average female wage amounted to 60% of that of men. This is exactly what Galor and Weil model would have predicted. Moreover, many Georgian women are selling their child-rearing and housekeeping skills abroad by serving (often illegally) as nannies and housekeepers. As Labadze and Tukhashvili (2012) estimate, the women’s share among Georgian labor migrants increased from 40% in 2002 to 43.4% in 2008. Additionally, as Dushuashvili (2012) points out, with Russia closing its borders, Georgian women are actively migrating to Greece and Turkey. The share of remittances from these countries has consequently increased from 3% in 2007 to 14% in 2012.

If women are indeed gaining economic power in terms of relative wages, one would expect their bargaining power inside the household to increase as well. One indication of this is the dramatic increase in divorce rates experienced by Georgia in recent years, more than doubling between 2005 and 2011 (from 4 to 9 per thousand of population).

In light of this, can we say that good times are indeed good for Georgian women? I will let the reader judge…