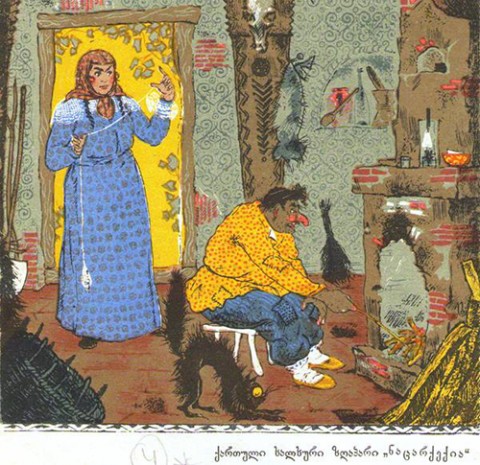 When I first started reading to my daughter I decided to buy a collection of Georgian fairy tales. However, as I started to read, I noticed that there were lots of things I did not agree with and found myself having to rephrase some of the passages as I read. I noticed that the poor are always portrayed as good characters and, no matter how they get rich (stealing from, deceiving or killing a “vicious rich giant”), social justice is assumed to have been met. I have always wondered what Natsarkekia, a lazy “ash digger”, who even after appropriating the giant’s wealth would probably go on to continue digging ash, can teach our children. Why should such a lazy guy be the most popular fairy tale character in our country?

I am not sure whether it is the subconscious influence of Natsarkekia or just a coincidence, but you will find lots of Georgians who would refrain from calling themselves hard-working. “Talented but lazy” carries the connotation of a compliment, while hard-working somehow points to a lack of talent. Some Georgians would not even mind calling themselves “talented but lazy”, completely sure in the fact that they are too talented to work hard. The general attitude towards work ethics in this part of the world has been greatly affected by the Soviet experience and, as Georgians are especially good at finding loopholes in arrangements, the Soviet past has influenced our mentality too. However, I would not put the entire blame for that on the Soviet Union. Maybe Georgian attitudes towards hard work has deep roots in more remote past?

As of today, only 7% of Georgians consider hard work important for getting a good job. More Georgians rely on pure luck (9%) than on hard work for their professional success. Age or talent, God-given traits that are impossible to change, are given as much credit by the Georgian population as hard work (CRRC Caucasus Barometer 2011). There is nothing bad in being willing to maximize an outcome with the least use of resources, however, work ethics are one of those few things that help one, variable upon the will of an individual, move up the social ladder. If we do not believe that our efforts have the potential to change our lives for the better, then all that remains are miracles for turning the poor into the rich.

Maybe that is the reason why Georgians are so supportive of redistribution. If we look at recent developments in the country, we can see the growing support for redistribution. The first sign of this was the election of a new political party. The “Georgian Dream” coalition is obviously more equity-oriented than the previous ruling party. The coalition heavily emphasized that fact during its pre-election campaign, promising to address existing social problems through increased subsistence allowances, increased pensions, higher spending on education and healthcare, etc. Even back in 2010 most Georgians blamed social injustice for people being disadvantaged and 66.7% were ready to personally contribute in order to help those in need (Life in Transition II by EBRD and World Bank, 2010).

Of course, there are also more direct reasons for supporting redistribution. Despite Georgia’s spectacular growth, the amount of poverty registered increased from 6.4% in 2007 to 9.7% in 2012 (GeoStat). Additionally, subjective poverty (people registered in the database of social assistance as a share of total population) is about four times higher than the number of people receiving assistance. 36.9% of the population and 45% of families in Georgia are registered in the database of socially vulnerable, i.e. seeking financial support from the government (SSA).

In terms of redistribution preferences, Georgia is more like Europe than the land of opportunities. Georgian fairy tales might have affected our subconscious in a way that most of us put ourselves in the shoes of the poor and perceive ourselves as poor. Here poverty is not perceived to be a personal failure; rather, it is viewed as a failure of the system. In the US, poverty is regarded as a personal failure because if you had worked hard, you would have been successful. In Georgia, neighbors usually complain to each other about their poverty, in the US neighbors try to show each other how rich they are. In Georgia you are poor because you were not given the chance to unleash your talent; it is not your fault and the government is responsible for taking care of you. That is the difference between the Georgian and American dreams!