A Portrait of a Tushetian Farmer as an Entrepreneur

Mar 14 Posted by Eric Livny in Agricultural and Rural Policy 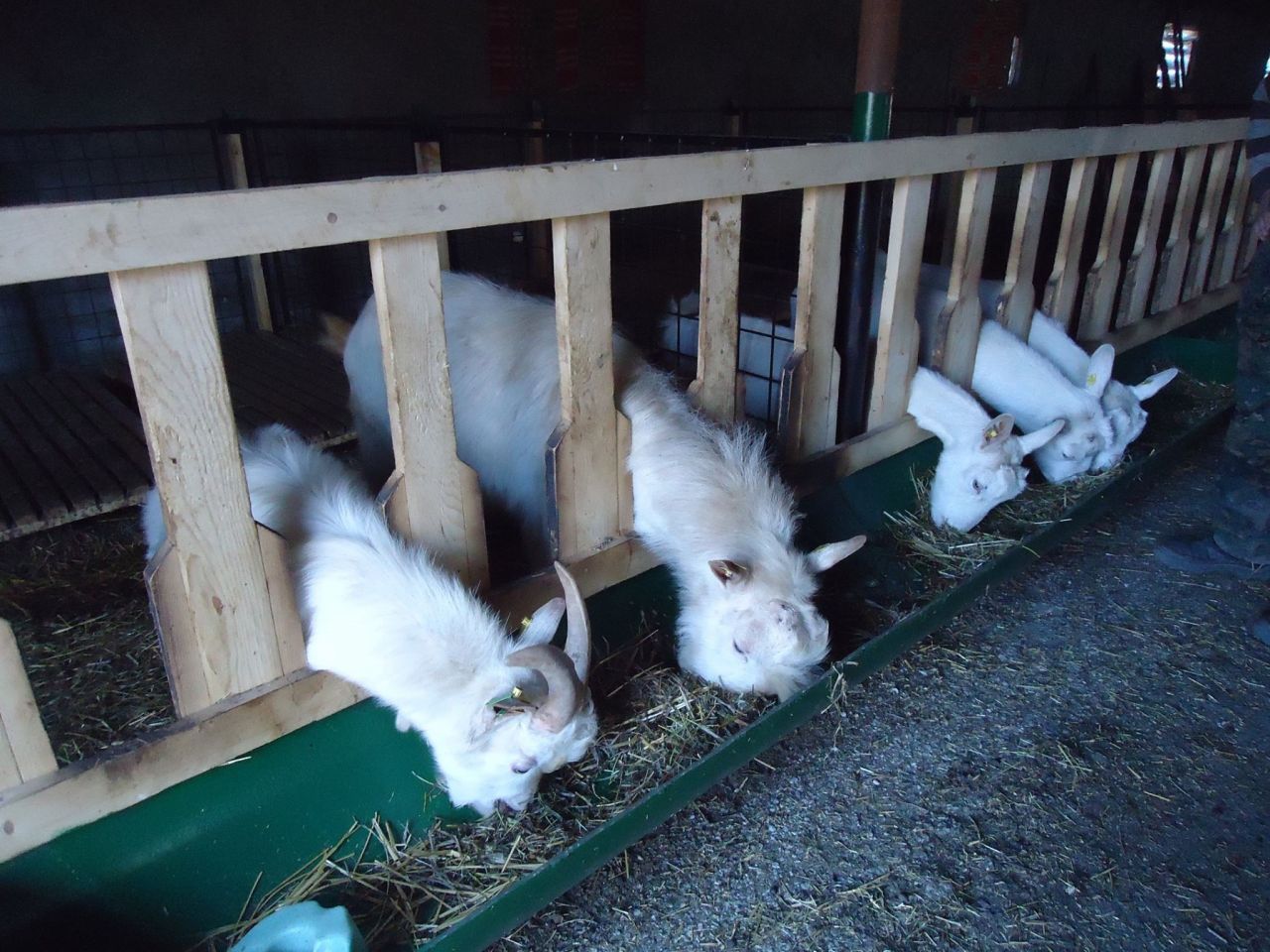 We first met Gogi Elanidze in winter 2015, when interviewing farmers in Rati’s village, Kvemo Alvani. Located in Akhmeta municipality, Kvemo Alvani and its twin, Zemo Alvani, are not your usual Kakhetian villages. The two serve as the winter base for the people of Tusheti, an isolated valley separated from Kakheti by the 3000m high Abano mountain pass.

Gogi Elanidze was born into an above-average Tushi family. His father, Daniel Elanidze, resigned from his job as director of the Telavi Cheese Factory in 1988 in order to establish, together with his sons, one of Georgia’s first commercial farms. (These were early Perestroika days, and the family farm had to be disguised as a ‘cooperative’.) This was a risky and difficult endeavor, but with Soviet rubles in plentiful supply, and consumer goods sold exclusively under the counter, the family’s pig farm turned to be a lucrative business, allowing to quickly complete all major construction works and acquire farm land and machinery from the local sovkhoz.

Everything was fine until it wasn't.

Daniel Elanidze died, heartbroken, in 1994. Only 59 in his death, Daniel could not see his business fall prey to extortion by greedy mafia gangs in the chaos and lawlessness of Georgia’s early years as an independent state.

During the next 12 years, in a desperate effort to fend for his family, Gogi tried himself in every possible occupation, moving from job to job and from country to country, in the best of Tushi shepherd traditions.

In 1994-5, Gogi drove a bus on the Georgia-Turkey line, but, having had his passengers robbed by the Mkhedrioni thugs, decided to get a much safer tax inspector job in Akhmeta (working for the state is not my thing, he knows to tell today). He continued his Odyssey growing watermelons and tomatoes in south Russia, and then sailing a fishing vessel in Poti.

In 2005, Gogi finally hit a jackpot, landing a risky but well-paid job as a truck driver carrying supplies for the American military in Iraq. In one year, he managed to put aside more than 10,000 USD – paid directly into his bank account in Telavi – enough to invest in a small factory producing plastic doors and windows.

Gogi’s ability to win municipal contracts for the refurbishment of local schools and public buildings in Kakheti, gave him a stable source of income for the next 7 years. It also provided Gogi with the financial slack to start thinking about going back to his agricultural roots and what was left of his father’s farm.

The first thing he tried, in 2009, was beekeeping. Honey was good business, but, perhaps more importantly for Gogi’s Tushi soul, it gave him the opportunity to go back to Mother Nature, and the traditional way of shepherd life. Just like his ancestors migrated with their sheep between Tusheti, Shiraki and Alvani, Gogi would load his beehives (about 120 at peak) on a track and take them on a two-month tour of Kakheti: from the acacia groves of Lagodekhi in early April, to the lush wildflower meadows of Shiraki, and to the linden forests around Kvareli in late May. (Needless to say, Gogi’s honey is really worth trying).

Two years later, in 2011, Gogi ventured into horticulture, planting 600 persimmon trees next to his father’s farm. With a drip irrigation system added in 2015, he expects his persimmon harvest to reach 18-20 tons in just a couple of years, once trees grow to full size. This would make for a full truckload, he explains, making it easy to sell to Ukrainian buyers whose trucks circle Kakheti around harvest time, loaded with packaging materials, pallets and all.

OK GOOGLE, HOW DO I START A GOAT MILK FARM?

In 2013, as his plastic windows business started winding down, Gogi hit upon a new idea: a goat milk farm. He’s read about the health benefits of organic goat milk. He’s heard of French goat cheeses. He was familiar with the myth that goats would eat almost anything from apples to bark to unsold Xmas threes and brooms. But how on Earth does one get started? Since goats and goat milk were anything but common in Alvani’s sheep breeding community, there was little chance of getting expert advice or learning from the experience of others.

Luckily, Gogi had a computer connected to the World Wide Web, and so he was able to teach himself. When we met one Saturday morning on his father’s farm, Gogi was using the drawings he’s found online to refit the old pig house to accommodate the goats he’s just bought on the local market. By then he knew that local goats are a lowly bunch, producing about 0.5-1 liter of milk per day as compared to 4-6 liters by the elite Swiss breeds. The simplest solution was to import male goats from Switzerland in order to improve the local breed, a process that would take 3-5 years. 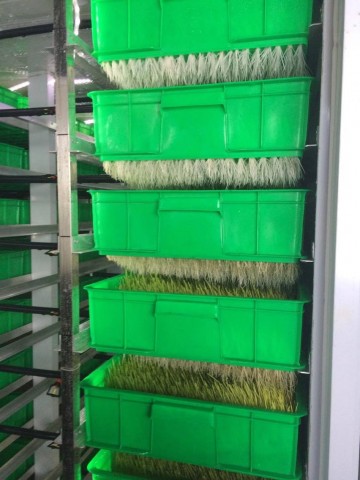 Yet, transporting a small number of Swiss goats turned out to be a financial impossibility. After an extensive search, Gogi found another goat milk enthusiast in Natakhtari with whom he could join forces to save on delivery costs. A deal was struck, and in May 2015 five Saanen billy goats proudly stepped on the red carpet rolled for them in Kvemo Alvani.

A year later, 29 of Gogi’s nanny goats (the best ones he could find) gave birth to 39 kids. While the little snow white babies are strikingly similar to their aristocratic fathers, Gogi knows that it would take a couple of additional generations and at least three more years for his goats to get to the original Swiss level of productivity.

Since Xmas trees and brooms are not an ideal long-term source of animal feed, Gogi invested another $8,700 in a China-made hydroponic feed production plant. Incidentally, he was hoping to have at least a part of his investment financed by the Georgian government’s “Invest in Georgia” program, for which he applied, but could not afford waiting 4 months for the review process to be completed. His goats had to be fed.

As Gogi knows to explain, hydroponics is an excellent solution for Georgian smallholders who are short on pasture land. His plant consists of five compartments, equal to the number of days it takes for barley seeds to grow to optimal size in a nutrient mineral solution. Each day, Gogi plants one compartment with about 30-40kg of barley. Five days later he is able to harvest up to 150kg of 100% organic green fodder, which is more than sufficient for his current needs.

Gogi’s pace is truly breathtaking. A partnership is already in the making between him and other goat farmers (yes, Gogi is no longer alone) on joint cheese production, meat goat farming and genetic improvement of their herds. Finally, he is in talks with Jean Jacques, a mythological Frenchman who settled in the nearby Argokhi village, on the possibility of learning French cheese recipes and marketing cheese, wine and other delicacies through Jean Jacques’ Tbilisi shop and expat networks.

Very importantly for Gogi, his entrepreneurial successes may be reason enough for his son Levan (25), a civil engineer by education, to join the family business and continue in his father’s footsteps. His daughter, Salome (21) is a 4th year student at the Tbilisi Arts Academy. A talented artist, Salome is not very likely to go into farming. Well, nobody is perfect.