5 Million Tourists in Georgia by 2015 - a Myth or Nightmarish Reality? 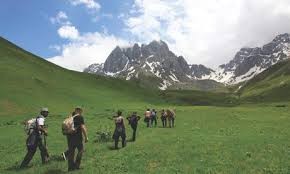 Judging by the number of foreigners entering Georgia since 2004, tourism expanded at a breathtaking average pace of 32% a year, nearly doubling every three years. A simple extrapolation suggests that in four more years, by 2015, Georgia may be receiving more than 5mln tourists per year. Is this a realistic estimate? Would it be a blessing or a curse (in disguise)? 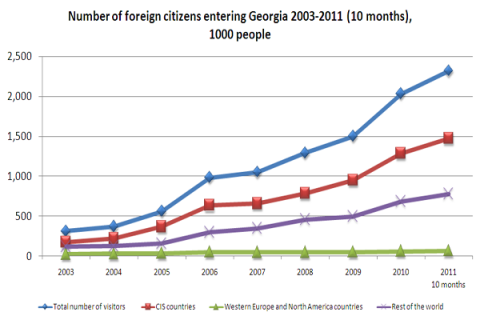 The growth in the number of visitors far outstripped the pace of investment in the tourism infrastructure, driving prices up and negatively affecting the quality of services. Thus, the main causal explanation for such a spectacular growth is the country’s new image as a top economic reformer, an island of democracy; exotic, under explored and yet a secure location with good food and wine, relatively close to home. So far, tourists have been willing to pay a significant price premium to satisfy their curiosity for this Near Eastern outpost of Western civilization.

There are reasons however, to be skeptical about mass tourism as a driver of long-term economic development in Georgia.

Unfortunately, tourism – like many other labor intensive service industries – has little potential for substantial productivity growth: it takes about the same amount of labor to cook one Imeretian khachapuri today as it did in the 19th century.  As wages are typically tied to productivity this also means that tourism in and of itself has little potential for income growth. Wages in tourism may eventually increase – a phenomenon known to economists as “Baumol’s cost disease” – when other sectors improve their productivity and start competing for workers with the tourism industry.

Thus, if the Georgian government decides to continue to invest in tourism it should be advised to worry not about the sheer number of tourists but rather about the amount of money they spend in the country. According to this view, Georgia should strive to increase the share of relatively wealthy tourists from Western Europe and North America who account for a meager 3.6% of total border crossings by foreigners in the first 10 months of 2011. Of particular importance would be to increase the number of tourists visiting the country in the offseason period. This  would help attract additional investment in human and physical capital, bringing the quality of services to a level appropriate for high-end tourism.

A shift to high-end tourism would help boost incomes and productivity. And it is this factor – how productive we are – that will ultimately define the quality of life in Georgia.